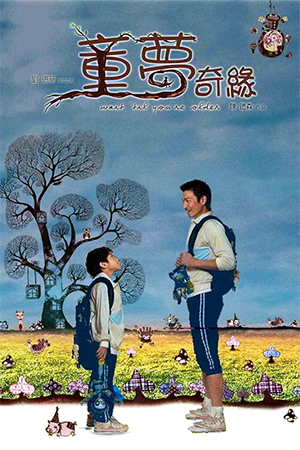 Andy Lau scored one of 2005’s biggest hits with this intriguing blend of comedy, drama and fantasy. While it may appear little more than a pale copy of ‘Big’, director Teddy Chen has a few surprises in store for his audience and fashions something quite different from humble material.

Kwong lives with his father (Wong), step-mother (Mok) and a younger brother in modern day Hong Kong. Despite being doted on by his father, Kwong refuses to accept his new mother and makes life unbearable for her in every way possible. His selfish behaviour is condemned by his father, but the young brat thinks the world is against him and he runs away from home. While Kwong is away from home he comes into contact with a peculiar chemical that ages everything it comes into contact with. When he accidentally touches it, Kwong finds himself aging overnight and by the morning he has morphed into an adult (Lau). This development means he cannot return home and his parents launch a city-wide search for their son, but Kwong begins to savour the adventure of being so different. His first task is to acquaint himself with the object of his unrequited love, a beautiful young teacher who begins to notice this mature Kwong and appreciate him as an equal. Such moments are fleeting though and the still developing boy begins to pine for the family he so hastily rejected.

It would be easy to dismiss ‘Wait ‘Til You’re Older’ as a Hong Kong ‘Big’. Both share a basic concept and both utilise leading men who somehow embody their respective film industries, though Teddy Chen’s work stands confidently on its own two feet. It may be a musing on the nature of maturity and the need to rediscover some inner-child within us all as was the case in ‘Big’, but goes down a significantly more philosophical path.

The first half of ‘Wait ‘Til You’re Older’ meanders along harmlessly though hardly appears to be the making of a memorable feature. Familiar dynamics are used as Kwong is established as the selfish protagonist and slowly developed in his adult role later on. This proves to be the least involving chapter of an otherwise interesting feature and do little but introduce the character relationships rather than attempt something unexpected. As with ‘Big’ though, ‘Wait ‘Til You’re Older’ hits its stride when its lead character is finally thrown into the adult world and forced to fein maturity to fit in. ‘Big’ uses this dynamic in a typically humourous way whereas Teddy Chen concentrates on a more dramatic framework, examining the tensions within the family. Kwong is forced to face the problems he has caused and confront his own obvious flaws – all of this makes up the dramatically affecting final third. The masterstroke of this production is to end on an unusual caveat; without giving too much away about the ending, it refuses to take a convenient route to safety and settles on a pensive tone that leaves a lasting resonance.

Despite drawing in viewers due to Andy Lau’s name appearing on the poster, acting honours go to Felix Wong and the underrated Karen Mok. Wong rises above his more illustrious co-star with a performance of understated gravitas and manages to make possible cliches seem human. Wong may not enjoy completely convincing chemistry with Karen Mok, but both of them succeed in fleshing out characters who require our sympathy. These superior efforts from Mok and Wong mean that later probings into deeper emotions have real heart at their centre.

‘Wait ‘Til You’re Older’ is commercial film-making at its most polished, yet contains a few brave decisions by director Teddy Chen. Such ideas leap beyond the fantastical concept and lift a good film into something slightly more significant. Well acted and imaginatively directed, this is a pleasing change from the expected.