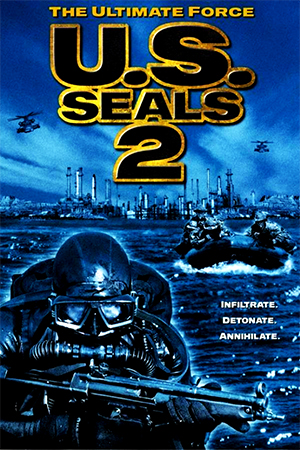 After it was heavily previewed in ‘Impact’ magazine, ‘U.S. Seals 2’ immediately jumped onto my radar. Featuring fight choreography by Andy Cheng, the film looked to have all the makings of another b-movie action classic. Sadly though, it didn’t quite live up to expectations…

Casey Sheppard (Worth) and Frank Ratcliffe (Chapa) are two of the finest Navy Seals in the outfit as well as being very close friends.  That is until Ratcliffe decides to switch to the dark side and he sets up camp in an abandoned Russian nuclear missile base that just so happens to have some handy leftovers lying around.  Unsurprisingly, Sheppard is the first to offer his services to bring in Ratcliffe but there is one small problem; the base is filled with methane gas and the slightest gunshot or spark will light it up.  Therefore, fighting skills are the main order of the day so Sheppard recruits some of the toughest guys and gals he knows to assist him in his mission.  Now it’s up to our would-be band of heroes to whip up a storm and save the day!

Seeing as how it sports a ridiculous plot and lacks any big name talent, the best that ‘U.S. Seals 2’ could have hoped for was to provide a big slice of cheesy fun. Unfortunately though, director Isaac Florentine seems to take things a little too seriously and the first half of the movie is just plain painful. Featuring almost 45 minutes of mundane plot points, the film seems determined to pile one silly idea on top of another and it really starts to become a chore to watch. If you manage to resist the temptation to hit the off button though, you are eventually rewarded with some surprisingly well choreographed action. Andy Cheng has clearly picked up a thing or two from his time in the Jackie Chan stunt team, and all of the fights are bone-crunchingly effective. Ably performed by the likes of Cheng and Sophia Crawford, the moves are extremely slick and there’s some very solid combinations on display. The only real letdown is that there just isn’t enough of it and we only really get to see two main brawls.

‘U.S. Seals 2’ features a truly awful script, some under-par acting and an abundance of bad clichés. Luckily though, Andy Cheng is on hand to save the day with some action choreography that is well above average. Whether or not it makes it worth sitting through the rest of the movie however, is extremely debatable.