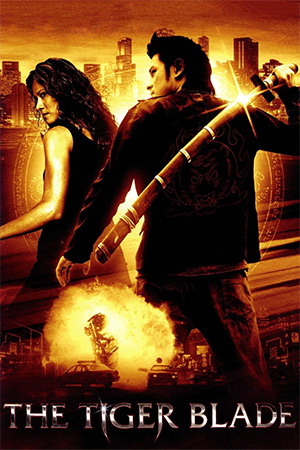 Yosthana is one of the top cops on the force thanks to his knack for tracking down crooks and generally beating the hell out of them with his impressive fighting abilities.  When the police get wind of a prison breakout planned by one of Thailand’s most notorious gangsters, they put Yosthana and the beautiful but deadly Duangdao on the case.  However, they didn’t count on the criminals possessing superhuman abilities that not only make them practically impossible to defeat in hand-to-hand combat but also protect them from bullets.  Luckily, an ancient sword known as the Tiger Blade exists which will allow Yosthana to equal the powers of the gang and break down their spiritual energy. Of course the first thing he has to do is find the sword and with time running out, the race is on to see whether the good guys or bad guys will emerge victorious.

If you weren’t already aware of its roots, you could easily be excused for passing off ‘The Tiger Blade’ as just another straight-to-DVD American B-movie.  Sure, it has a touch of Thai culture and includes a smattering of Martial Arts action, but it’s the distinctly Hollywood flavour that regularly prevails. Making ample use of just about every cop movie cliche in the book, the film is totally devoid of originality and is often so bland that it borders on being boring. The whole special powers/magic sword aspect seems to be bizarrely underused, and all we really get is numerous ridiculous double crosses before the good guy eventually saves the day and gets the girl.

When it comes to the fights found in ‘The Tiger Blade’, it’s strange to see that it opts not to go with the hard-hitting approach found in recent Thai outings such as ‘Ong Bak’. Instead, we get a mix of over-the-top gunplay and ‘Matrix’ inspired special effects-laden fight scenes. Unfortunately, neither are particularly well handled as the gunplay looks very sloppy and the wirework is ruined by the actors as they clumsily swing around gripping the wires. It’s also disappointing to see that the film lacks any kind of final fight, and we are just saddled with an extremely dull Mexican stand off that is the result of another one of the film’s monotonous double crosses.  Oh, and of course I can’t fail to mention that the amazingly powerful “Tiger Blade” is really only used once!

Those of you assuming that Thai action cinema could do no wrong will be bought back down to earth with a bump after watching ‘The Tiger Blade’. This is a tedious and totally uninspiring effort that fails to generate even an ounce of excitement.