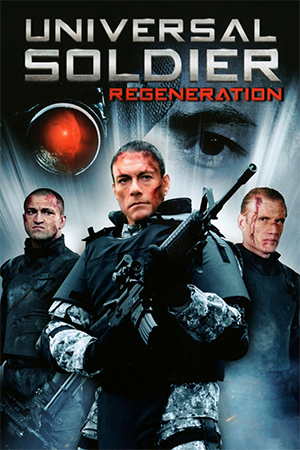 When terrorists seize the crippled Chernobyl nuclear reactor, they threaten to unleash a lethal radioactive cloud unless a group of prisoners are released. Despite their best efforts to infiltrate the facility, the government run into serious opposition in the form of a new genetically enhanced edition of the Unisol programme (Arlovski). Their only hope of stopping him is Luc Deveraux (Van Damme), a UniSol who has been decommissioned for years. Reactivated and retrained, Deveraux is sent in to make a full-out assault on the heavily armed fortress. Once inside though, he discovers not one but two of the virtually indestructible warriors. Andrew Scott (Lundgren), Deveraux’s vicious UniSol enemy, has been secretly reanimated and upgraded. Now these elite fighters are locked, loaded and programmed to kill; and the fate of millions hinges on this high-action showdown.

Although it has already given us three sequels (one official and two unofficial), the ‘Universal Soldier’ franchise has rarely delivered on the promise of the 1992 original. Thankfully though, that is all about to change as ‘Universal Soldier: Regeneration’ finally provides fans with a respectable follow-up that is also a very entertaining action movie in its own right. Opting to ignore the stupidly over-the-top events found in ‘Universal Soldier: The Return’, the film goes back to basics and delivers a simple terrorist storyline that calls the Unisols back into action. Whilst this scenario does allow for a number of predictable clichés and gaping plot holes, the dark perspective and action-orientated approach easily allows the audience to see beyond the obvious flaws. Added to this, the film makes excellent use of the bleak landscapes of Bulgaria, giving the production a professional and classy look that defies its b-movie roots.

Unfortunately, the one major problem with ‘Universal Soldier: Regeneration’ is that it lacks any kind of clearly defined main characters. The majority of the story is communicated via the events rather than the actors, meaning we never really get a chance to become involved with the so-called life threatening predicament. Van Damme’s character is presumably intended to be the hero of the piece, but he seems to be noticeably absent for large portions of the movie. When we finally do get to see something of his personality, he just seems to be a manic-depressive who has retained very little of the innocent charm that defined his original character. Meanwhile, Lundgren’s return to action is far more impressive and he really manages to recapture some of that maniacal magic which made Andrew Scott so entertaining. Sadly, his role is limited to little more than an extended cameo and after two scenes he is dispatched of with uncanny ease. As for Andrei Arlovski, he does okay but only has one line of dialogue before he is resigned to playing the mindless meat that just stalks around trying to look menacing.

The action on display is probably the film’s real ace in the hole, and on this alone it certainly becomes a must-see. The majority of the combat has clearly been inspired by Arlovski’s UFC background, and most of the fights focus on close combat rather than Van Damme’s usual spin-kick infused encounters. While this may disappoint some, I think it works perfectly in terms of the film’s overall theme as the Unisols are intended to be accomplished killing machines rather than kung fu masters. That said though, there are still bizarre moments when they needlessly drop their weapons and just decide to go toe-to-toe seemingly just for funsies. When it comes to the film’s gunplay sequences, these are far and away the pièce de résistance and some of the choreography is nothing short of superb. Shot almost like a 3rd-person video game, each sequence has the camera sitting behind the actor as he makes his way through the battlefield. This perspective really makes for some very tense and exciting scenes, all of which are refreshingly shot using a static camera that allows us to clearly view all of the excellent stuntwork.

Despite being labelled as a DTV outing, ‘Universal Soldier: Regeneration’ emerges as both an entertaining entry into the franchise and a respectable little action movie. Admittedly it would have been nicer to see more of the main stars, but we should at least be thankful that we finally have a solid sequel that makes good use of the concept.