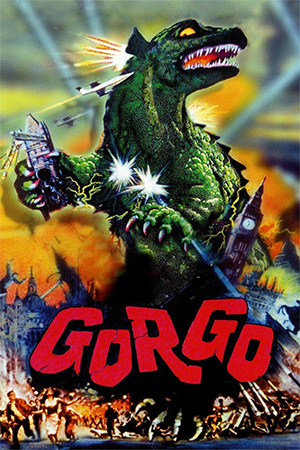 The posters for this 1961 creature feature screamed, “Like Nothing You’ve Ever Seen Before!” Unfortunately for modern audiences there’s little that is covered in Gorgo that was not already riffed on in ‘Godzilla’ or ‘King Kong’ with a slight parental twist. What makes this Toho influenced monster movie so interesting though is the fact it’s a British movie.

British?! Yes, a Kaiju themed movie from the time of Hammer horror, Gerry Anderson and long haired popstars from Liverpool. Alas this movie does not involve a giant prehistoric beast eating mods and teddy boys but it does involve plenty of colourful monster action that any J-Monster fan will dig.

The plot is fairly simple, some sailors at sea capture a reptilian sea monster whilst investigating the destruction of an island off Ireland and take it to London. There people see pennies and shillings in front of their eyes, drug the beast and stick it in Battersea Park for everyone to see, provided you pay. Everyone sits around looking at the shackled Gorgo until its mother turns up and everything goes to hell.

Mummy Gorgo is HUGE, the baby is big but a pea compared to Mummy. Mummy Gorgo hits Britain like a blitzkrieg and with any luck stepped on Dad’s Army as she trashes the army and southern England with all the fury of a Star Wars nerd learning Lucas is about to re-issue Star Wars again.

This film might be a trash blast from the Sixties past but it’s more ‘Godzilla’ than a Doug Mcclure movie. Mummy Gorgo’s reign of terror is filmed in a style and fashion reminiscent of the original ‘Godzilla’, where you were left thinking about the actual cost of such an event. There’s a sequence in ‘Gorgo’ where Mummy Gorgo smashes a wall down into a crowded street that rivals the moment in ‘Godzilla’ where the big G picks up a train. Ouch!

‘Gorgo’ is an unexpected treat, I walked into it expecting ‘Godzilla’ given a British spin on a Dr Who episode budget, instead it is a great, colourful thriller of a bygone age. You won’t shake the sight of Gorgo rising from the ocean, red eyes blazing for a long time.