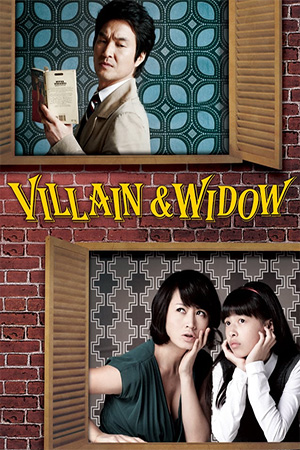 Into the mundane life of depressed widow and mother Hyun-Joo comes alleged novelist Chang-In who has decided to rent the spare room that she advertised locally. While Hyun-Joo is at work and her teenage daughter is at school though, Chang-In is rummaging through their house looking for an antique Chinese tea-cup hidden somewhere by her late husband. The widow is oblivious to the treasure, but Chang-In, having been double-crossed by the husband while he was alive, is determined to find it and has already lined up a buyer.

As the search for the tea-cup becomes more desperate and more obstacles seem to be put in Chang-In’s way, he finds himself being drawn into the lives of the mother and daughter. Meanwhile an eager young policeman is taking it upon himself to investigate the supposed writer, leading to Chang-In’s lies becoming increasingly outlandish.

Although the synopsis gives the impression that ‘Villain and Widow’ is a psychological thriller it is in fact a dry comedy with a dark tinge to it. And it happens to be a rather good one at that. Director Son-Jae-Gon made a splash with his previous hit, blackly humorous rom-com ‘My Scary Girl’, and this most recent effort shows that he is developing into a film-maker with a real aptitude for comedies with a tougher edge.

The central dynamic of the film, the eponymous pair, is a superb core on which the story builds. Korean mega-star Han Suk-Kyu is outstanding as the anti-hero, playing on his on-screen reputation as a charmer, parodying the slick moves that made him such a draw in past dramas. Kim Hye-Soo is the perfect person to play off the actor and transforms from the beautiful actress she is known as into the dowdy and neurotic widow who causes Han Suk-Kyu so much consternation.

‘Villain and Widow’ is a witty comic creation that has so much more punch than many of its Korean contemporaries. Son Jae-Gon may not be a prolific writer/director but when the result is this enjoyable it shows his efforts are well worth the wait.