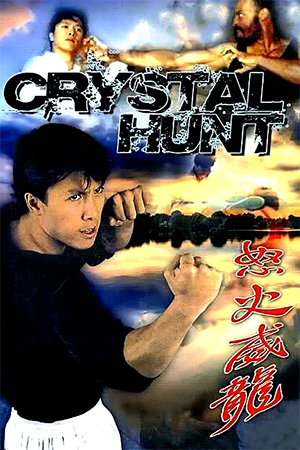 This is the first of two films filmed back to back, the other being ‘Cheetah On Fire’ featuring an almost identical cast and similar Thai and HK locations. They are both clearly low budget affairs and one could be mistaken for wondering what some of the cast members are doing in such a film, as they are unlikely to have been paid much, and neither was ever likely to succeed commercially!

The plot is light and full of holes, as we follow various groups of gangsters looking for the ‘golden crystal god’ for its magical powers. Donnie and Sibelle Hu are trying to find it to save an old man’s life and inevitably get caught in the thick of a lot of action along the way. Plotlines are not what these films are about, and it would be foolish to expect anything intelligent or even coherent! As a result, it is the action that holds your attention, as we move from one set piece to another.

Unfortunately, the action here is not quite as good as ‘Cheetah on Fire’ and the first hour is fairly disappointing, and although many of the stars appeared in ‘Tiger Cage 2’ and ‘In the Line Of Duty 4’, this film is not in the same class. The final 30 minutes is superb however, and a real showcase for the talents of all involved. Donnie is superb as always, while his close friends and frequent Gwailo villains John Salvitti and ex-Navy Seal Michael Woods are as good as in all their other outings. Thankfully the under-cranking is kept down to a minimum leaving only the poor camera work to distract us.

If you are a big Donnie fan, or loved ‘Tiger Cage’ and the ‘In The Line Of Duty’ films, then this will surely be a welcome addition to your collection. If, however, you like your films polished, and not just an excuse to watch people fight for little or no reason, then I suggest you look elsewhere! 2 stars for the film, but 4 for the fights.

A note to those who may buy this film: If you see the UK Eastern Heroes VHS, be aware that it is only wide-screen for the first 5 minutes or so. After that it is full screen, which cuts the end off some of the subtitles! Not that it makes a lot of difference to the coherence of the story!