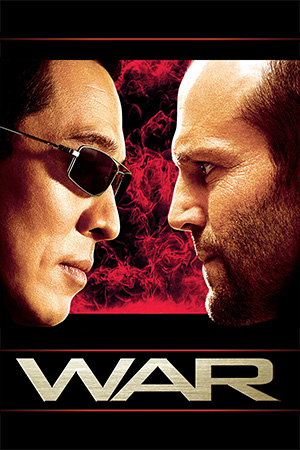 ‘War’ is never really sure what it wants to be. Is it a full throttle action flick? Not really, though that is the way it was sold. Is it a gritty thriller about Triads, Yakuza and deadly assassins? Not really either, though again it does try and, in some scenes, comes close. It’s a bit of both: there’s some action, there’s some drama, there’s some double crossing and there is quite a bit of talking from loads and loads of characters (something the trailer certainly didn’t play up). Li is a deadly assassin called Rogue who is trying to spark a war (for various convoluted reasons) between local Triads and Yakuza. Statham and his partner get in his way, the partner predictably killed setting Statham on a quest for moody vengeance. Thus, all hell breaks loose. Well, it eventually does, sort of and then just kind of ends.

The problem with ‘War’ is that there just isn’t enough grit and oomph to make it a tough thriller and not enough action to make it a fun action movie. The production is slick, the cast filled with familiar faces but it all kind of goes nowhere until a twist comes out of leftfield and then, as mentioned, everything just kinda ends. Li looks bored and often seems like he can’t wait to get out of there. Statham does his thing, shouts a lot and fights a little. The flick at least tries to take its story seriously, maybe a little too much sometimes, but doesn’t quite have the conviction to sell it. Everything is pretty standard up until the twist and there is unfortunately too many characters popping up here, there and everywhere, that after a while you just kinda wish they would all get down to fighting.

The action is not bad but nothing spectacular and never frequent enough. A car chase is all but spoilt by awful back projection, Kane Kosugi (‘Ninja: Shadow of a Tear’) is wasted in a blink-and-you’ll-miss-him cameo, but there is a hard-hitting shootout/fight in a Japanese teahouse. But with Li, Statham and action maestro Corey Yuen on board, there should have been more, bigger action.

Still, ‘War’ is entertaining in fits and starts, some scenes work well such as Statham and his partner sitting having a chat as the opening credits roll and there is decent swordfight come the finale. Yet it’s all quite average, and Li, Statham and Yuen teamed up for a better (and more entertaining) flick a few years earlier in ‘The One’.