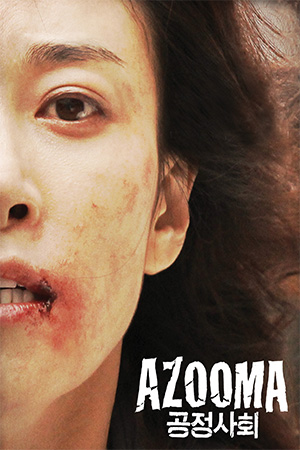 Azooma (Jang Yeong-Nam) is a single mother struggling to make ends meet. When an appointment overruns, she is unable to pick up her 10-year-old daughter (Lee Jae-Hee) from school and her daughter gets raped on the way home. She goes to the police to report the crime but they’re of no help as they believe the mother is overreacting. Her ex-husband, meanwhile, cares only about his reputation and constantly intervenes with the police in an attempt to save face. Now with seemingly no other options, Azooma takes matters into her own hands to get revenge on the man who violated her daughter.

While the premise may lead you to believe that ‘Azooma’ has the makings of a solid revenge drama, I’m sorry to say that the finished product is nowhere near as entertaining as it sounds. Right from the off, it’s fairly apparent that the writers barely got beyond the “mother out for vengeance” scenario and the film clearly struggles to fill the (very short) running time. The small amount of story we do get is told through sloppily edited together flashbacks, all of which seem to be made up of either the mother running around like a headless chicken or the same repeated shots of the abduction. You can also forget about any hope of tension, as we already know exactly who did it right from the start and the whole crime-solving element is simply laughable. Perhaps worst of all though, are the characters themselves as everyone in this world seems to be a complete jerk. This is particularly applicable to the men involved as they are all either arrogant pigs or sleazy rapists.

When it comes to the revenge itself, ‘Azooma’ doesn’t exactly go out of its way to satisfy the viewer. Aside from the lack of real confrontations, the main problem I had is that the villain is just so criminally underdeveloped. We understand that he is evil from seeing the abduction over and over (and over) again, but for a film in this genre to truly work we need to be made to hate him to the point where you want to jump into the screen and hit him yourself. As for the finale, the film opts to throw the audience a curve ball and dish up a violent slice of retribution. Now don’t get me wrong, I’m all for seeing this guy get his comeuppance and it’s clear that the mother has no other options, but it just doesn’t seem very in keeping with the overall vibe of the film. Also, the way in which she hands out justice makes for a really unpleasant watch and I would advise anyone planning to visit the dentist anytime soon (or ever again) to steer well clear.

‘Azooma’ was a big disappointment for me, mainly because it all feels so superficial and lightweight. One could almost believe that the idea was hatched within a few minutes as scenes are needlessly dragged out and nothing significant happens until the closing moments. If you’re a fan of revenge flicks, I’d advise you to look elsewhere.