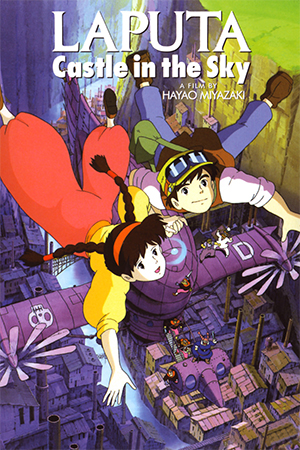 Following her parents death, Sheeta inherits a mysterious crystal that links her to the legendary sky kingdom of Laputa. Seeing its possibilities, the military decide to intervene and take Sheeta captive until they can unlock the secrets of the crystal. During their travels, they are attacked by a band of sky pirates allowing Sheeta to escape but at the expense of falling to her doom. Somehow she survives though, and is taken in by a resourceful boy by the name of Pazu. Unfortunately, it isn’t long before both the military and pirates locate Sheeta and so the pair set off on a journey that will hopefully reveal the crystals purpose.

After its somewhat subdued opening, I had my concerns about ‘Laputa: Castle In The Sky’. Whilst not exactly bad, the initial setup just seemed a little too predictable for a man of Hayao Miyazaki’s ilk. More fool me for doubting the master though, as it wasn’t long before my mind was set at ease. After establishing the basic concept, Miyazaki starts to set his grand plan into motion and begins to add layer upon layer. The result is a very cleverly constructed adventure that only lets the audience see one small step at a time, leaving us constantly guessing about the background of the mystery crystal and who will in fact emerge as the main villain of the piece. As is also the norm with Miyazaki movies, the surrounding world is a joy to behold and this particular entry is filled with amazing machinery and breath-taking backdrops that are all far more realistic than an animation deserves to be. However, the real magic here actually lies in the film’s characters, in particular Pazu and Sheeta. Aside from being extremely lifelike, the pair forge a great bond that allows for numerous touching moments that will definitely melt the iciest of hearts.

Unlike the plot, the quality in the animation is instantly recognisable and the film always looks stunning throughout. Utilising that old-school style of artwork that was synonymous with the likes of ‘Lupin III’ or ‘Doraemon’, ‘Laputa’ sports a slightly more comicbook look that is perhaps at its best when showing the lighter sides of the character’s expressions. That said though, it does work equally well when crafting out the scenery and the titular castle in particular shows a great eye for detail. Alongside the animation, it’s also worth mentioning that the voice cast all do an excellent job, with the likes of Mayumi Tanaka (‘One Piece’), Keiko Yokozawa (‘Dragonball’) and Kotoe Hatsui all putting in fine performances that show their versatility. The film’s soundtrack is also another big plus as it really knows how to set the mood, especially the action music that really gets the adrenaline going and puts you right on the edge of your seat.

Despite taking a little longer to settle than other Miyazaki movies, ‘Laputa: Castle In The Sky’ emerges as one of his most magical and charming outings to date. Not only does the film showcase his usual knack for fantastic imagery, but it also boasts one of the most heartfelt relationships found in a Studio Ghibli movie.