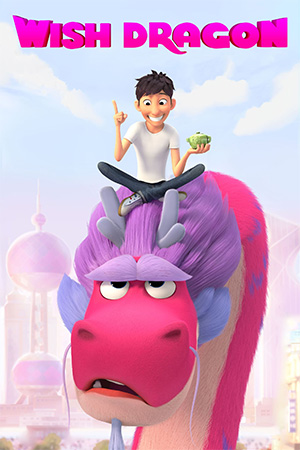 Din and Li Na are a pair of childhood best friends who quickly become inseparable. Unfortunately, they are torn apart after Li Na’s father becomes successful and opts to move his family out of the neighbourhood. Ten years later, Din is still longing to reconnect with his friend but she is now living the lavish lifestyle thanks to her new found wealth. One day, Din is gifted an old teapot by an elderly man which he soon discovers houses a magical dragon capable of granting him three wishes. The dragon informs Din that he is his tenth and final master, and completion of his duties will finally free him from his servitude. Unsurprisingly, Din sets about using his wishes to reunite with Li Na, but things quickly get messy after a trio of sinister goons appear on the scene looking to acquire the dragon for themselves.

As you may have already gathered, ‘Wish Dragon’ is a fresh take on the age-old ‘Aladdin’ folk tale. While it’s not exactly a beat for beat reworking of the concept (although it often comes a little too close to the Disney adaptation), it’s still a relatively familiar wish-granting story that adds a sprinkling of Chinese mythology. For the most part, this works quite well. Like many modern animations, it’s a very fast-paced and colourful affair that features an easy to warm to set of characters and some simplistic humour that is suitable for all the family. The star of the show, the wise-cracking dragon, is definitely a lot of fun to watch and he doubles as a fish out of water character to allow for some additional gags. There’s also the typically heart-warming lesson to be learned and a somewhat predictable but welcome happy ending.

In terms of the animation, ‘Wish Dragon’ is an equally well-put-together CG affair with decent character models that are easy on the eye. It’s pretty much on a par with most recent Hollywood animations and the design for the dragon in particular is very well handled. The quality of the voice acting is just as solid, and I actually went to the effort of watching both the original Chinese and American versions just to compare (don’t judge me!). While most of the actors do a decent job, the big standout is clearly Jackie Chan. Obviously he’s no Robin Williams, but his voice seems to fit the character well and his comedic timing is always spot on. In contrast, his American counterpart, John Cho, is fine but his performance reguarly feels somewhat underwhelming.

Although it is perhaps a little harsh to be critical of what is essentially a kids film, there are still a few niggles here and there that stop ‘Wish Dragon’ from rising above the pack. For starters, there’s not enough here to make the film stand out from the million and one other CG animations out there right now. It’s entertaining enough while it lasts but it’s instantly forgettable and ultimately tells a tale that we’ve seen done numerous times before. There are also a few moments of comedy that border on irritating (specifically the dinner scene) and the supposed Chinese backdrop really doesn’t add much to the story. Perhaps the most disappointing aspect however, is the strange reluctance to incorporate a romantic element. I appreciate that they’re trying to keep it simple but when the credits rolled I couldn’t shake the feeling that it would have been far more satisfying to see Din and Li Na end up as a couple.

‘Wish Dragon’ is a fairly fun and undemanding hour and a half, mainly thanks to some light-hearted humour and an enjoyable if unoriginal story. It’s probably better suited to the younger kids out there but if you’re looking for something simple to pass a Sunday afternoon then you could certainly do a lot worse.