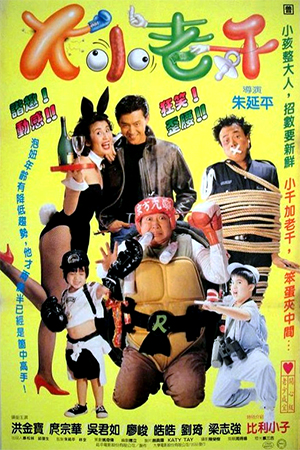 Apparently, Jackie Chan had to make ‘Fantasy Mission Force’ and ‘Island Of Fire’ to pay back Wang Yu for saving his life. If that really is the case, I can only imagine what poor Sammo owed Chu Yen-Ping for ‘King Swindler’ to be made. Short of giving the ‘Big Guy’ his firstborn child’s only functioning kidney, I’m at a loss to understand how Chu Yen-Ping could’ve press-ganged him into appearing in this maddening mess.

Closely following a script that was probably found in a promotional ‘Kinder Surprise’ egg, Sammo plays a hopeless chancer who, with his young son, spends his time swindling strangers. When one such swindle alerts the police, Sammo is arrested and his son is given to policewoman Sandra Ng to care for. The young boy befriends his new guardian and her mischievous (to put it politely) toddler, spending time as part of a real family. When his father is subsequently released from prison, the eager young son is desperate for a proper family and some stability to his life.

Like a particularly banal version of ‘Home Alone’ mixed with the dying embers of the ‘Carry On’ series, ‘King Swindler’ is an experience akin to being involved in some gruesome farming accident, but with far greater mental consequences. Even as I write this review, I look back on the shattered ruins of my life as I remain pessimistic of ever recovering a love for cinema after this. It starts with a spurt of action, moves onto an extended sketch with our two young ‘heroes’ up to various antics, then switches to a family drama and finishes with a mixture of everything. Abandon hope, all ye who watch this!

Just when you think Chu Yen-Ping cannot sink any lower – having subjected us to all manner of inanities – he then has the audacity to try to inject some pathos into the story. Much like adding a hint of peppermint to anthrax to make it more palatable, this merely looks like the desperate actions of a madman. Still, if you can sit through the moments of overblown melodrama, I’m sure that you wont be adversely affected by the deafening soundtrack that attempts to force us into certain emotions (I’m not sure nausea was one of the desired ones).

Nevertheless, every cloud has a silver lining so they say and ‘King Swindler’ can at least boast an encyclopaedic knowledge of the fart joke. Everyone breaks wind in this one, from the old to the very young and in an admirably researched variety of styles and locations. For the definitive guide to toilet humour, look no further – ‘King Swindler’ is to bowel movements what John Ford is to Westerns.

‘King Swindler’ is a traumatic experience. The ‘Cute Kids’ style of film-making is my genre from hell anyway, but these are an especially irritating brood and the film is especially mind-rotting. It eats away at you, gradually destroying your will to live and resigning you to a state of futile bewilderment. Please, let me be it’s very last victim.