“I’ve just bitten a snake. Never mind me, I’ve got business to look after.” –  Guo Jing, ‘The Brave Archer’.

There comes an unpleasant point in one’s life when pretty much every Shaw Brothers’ film of note has been viewed, digested and judged. Thankfully, the fallibility of recollection means that some of the films watched in the long lost past have almost evaporated from memory and are due a re-appraisal. Therefore, inspired by our current celebration of old school, I decided it was time to watch the ‘Brave Archer’ films again, one a day under doctor’s orders, and try to reacquaint myself with one of the more baffling trilogies in cinematic history. 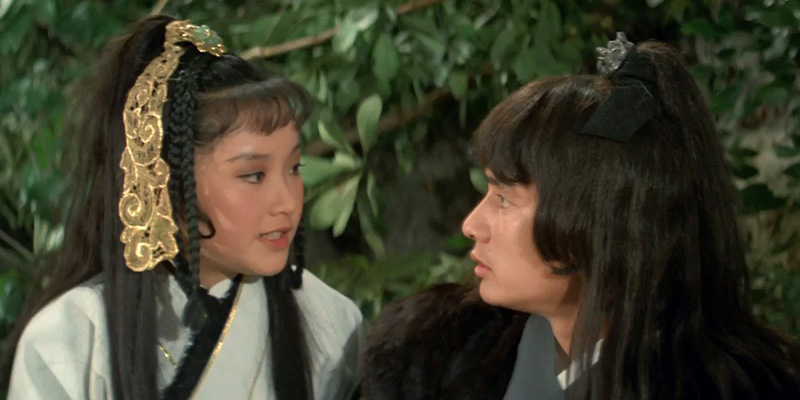 Although I have every intention to complete my journey with ‘Brave Archer and His Mate’ and its semi-sequel ‘Little Dragon Maiden’, only the original three films are under discussion here, though I think just under six hours in the wuxia world is enough for any partially sane man. As everyone will undoubtedly know, ‘The Brave Archer’ and its two successors are the Shaw Brother’s lavish take on Louis Cha’s celebrated novel ‘Legend of the Condor Heroes’, an epic story originally serialised in the Hong Kong Commercial Daily newspaper. It takes place during the latter moments of the Sung dynasty and features a variety of super-powered heroes who wouldn’t look out of place in a Marvel Comic.

‘The Brave Archer’ opens with the vow between two kung-fu masters that their firstborn sons would grow up to be sworn brothers. At this rather inopportune moment, the forces of the invading Jin empire appear, apparently kill the fighters (though one survives, played by a hirsute Dick Wei) and take the surviving wife away to be repatriated with her infant. That innocuous sprog grows up to be the somewhat spoilt Yang Kang (Li Yi-Min) while his now forgotten sworn comrade is Guo Jing (Alexander Fu Sheng) who is taught kung-fu by the Weird Seven (who soon become the Weird Six after an altercation, perhaps with Maroon 5 – I’m not too sure). 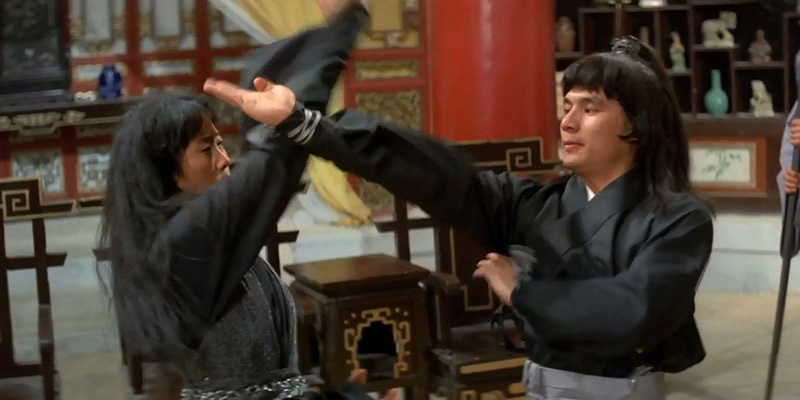 Guo Jing’s travels and the oddballs he encounters take up much of the first ‘Brave Archer’ film. Initially criticised by his Weird Seven mentors for not being the sharpest tool in the shed, Guo Jing has an admirable work ethic and ends up picking up tips from a variety of masters along the way including mischievous Po-Tang (the always brilliant Philip Kwok Chun-Fung who shines despite having a quite absurd wig plonked on his head), Beggar Clan chief Hung Chi-Kung (reliable ol’ Ku Feng) and Guo’s persistent guide from childhood Ko Chen-Ke. He also manages to make a few notable enemies including sulky Yang Kang who is now the adopted son of the Jin ruler who is planning his final invasion of Sung China and arrogant Ouyang Ko (Danny Lee) who, with his uncle Ouyang Feng (Johnny Wang Lung-Wei) seeks to rule the martial world.

Are you keeping up? Well all of this takes up a mere hour of the running time and generously entwined with characters who appear and disappear like ‘Live Aid’ acts rather than kung-fu despots. One thing the layman must be warned of when entering the world of ‘Brave Archer’ is the sheer amount of tangents which the storyline spins off into – every time Guo meets someone new it seems to herald another convoluted twist in which to turn. At its heart though, this first film is a love story between Guo and daughter of Peach Island’s scary head honcho. The couple first meet when our hero befriends future hottie Yong (Tien Niu in the first film) who is disguised as a rather unconvincing beggar. That great old female trick of pretending to be a dishevelled street urchin whilst clearing being a ‘babe’ (if you’ll pardon the vernacular) is utilised with fine effect. Unfortunately, when Yong reveals her true self and the two fall in love, we discover that she is betrothed to slimy Ouyang Ko who doesn’t appear to be the kind of guy to let the lady decide in an oh-so-21st Century male way. 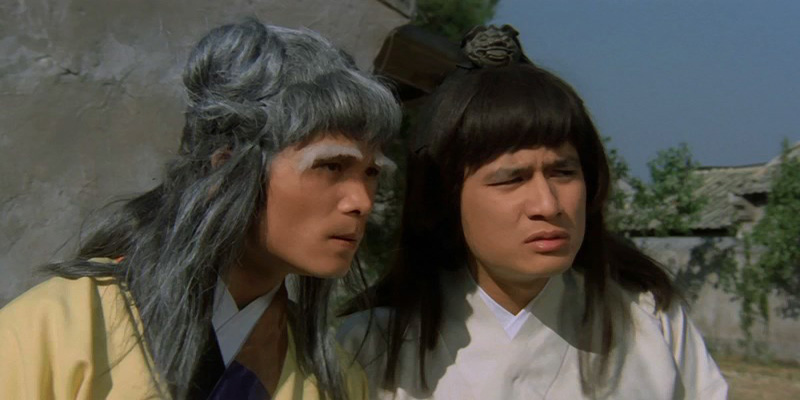 ‘Brave Archer’ then ends with a showdown between both amorous parties. Yet this isn’t settled by fisticuffs – oh no sir! – it is decided by a three part contest of skill, melody and poetry recital presided over by Yong’s dad (who can be accused of being little over-protective – is anyone worth putting with such difficult in-laws?). And so we have the rather underwhelming final twenty minutes where Fu Sheng bangs a rock repeatedly as some test of musical skill and Danny Lee falters at the poetry reading test. It almost reminds me of my own courtship though I had the far less pleasant task of eating cous-cous and lamb (my two most hated things) and pretending to like it to charm my future mother-in-law.

‘Brave Archer 2’ starts with our two love-birds absconding from Peach Island after being set-up by the ever unscrupulous Ouyang Feng. They’re on the run, have a kung-fu manual everyone wants (which Guo acquired in the last film) and are being accompanied by Hung Chi-Kung. When the silver-clad villain hits our hero with his famed strike, Guo is forced to recover his inner-strength with the help of his fiancée (now played by the lovely Niu Niu). To this end the two find themselves holed up in a secret compartment at the back of an abandoned restaurant, palm to palm and unable to leave their charming abode for a week. For the next forty minutes the pair observe all of the drama through the crack in the wall and are gladly helped by a variety of characters keen to discuss their detailed plans in this grotty eatery. Acting as a forerunner of a really detailed commentary track on a DVD, Yong explains who all of the newcomers and old has-beens are. Unfortunately, Ouyang Ko – walking on his hands due to sustained crushed legs when a miss-timed boulder on the legs when he last met Guo (and he isn’t a forgive-and-forget kind of chap) sees the malingerers in their hidey-hole and sets about winding them up for a good fifteen minutes. 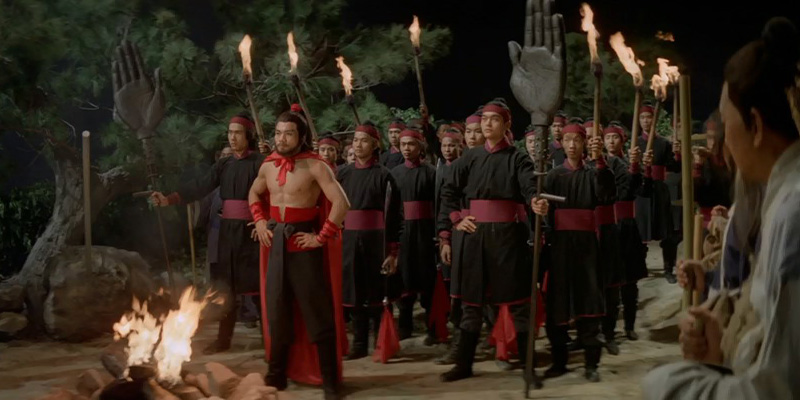 ‘Brave Archer 2’ spins off into the politics of the Beggar Clan and their appointment of a new leader. You have to admire these underprivileged, stick wielding beggars as they’ve set-up a socialist co-operative despite not having a penny to their name. Eventually, after a misunderstanding that heralds the arrival of an Iron Palm chief played Lo Meng, the beggars accept to the ascension of Yong to the role of chief despite her refusal to allow them to spit on her in a peculiar sign of acceptance (nothing wrong with a firm handshake in my mind). And so, with a plethora of characters introduced and occasionally dispatched throughout, ‘Brave Archer 2’ ends with the heroic duo safe and sound while the Iron Palm chief plans revenge after his compliance with cowardly and conniving Yang Kang (still played by Li-Yi-Min). By now it should be apparent that the majority of sub-plots and intrigues are left untied, showing just how much needed to be left out from the ‘Condor Heroes’ source material to squeeze the story into three generously-apportioned films.

‘Brave Archer 3’ is the shortest of the three films by a not unsubstantial thirty minutes, but you will be gratified to learn that it still has a fresh draft of new characters (mainly played by actors we’ve already seen as someone else). Part three starts with a helpful little recap of the past film and continues exactly where this left off. Guo and Yong manage to incur the anger of Mr. Iron Palm again who this time hits Yong with his famed move, leaving her with three days to live. As is often the case in these wuxia epics, there is one – only one – doctor who can save her, but naturally he isn’t available on the NHS. In fact, he lives atop a mountain, guarded by four none-too-bright bodyguards (a matter proven when sickly Yong outwits them with embarrassing ease) and doesn’t accept appointments – not very Hippocratic I grant you. 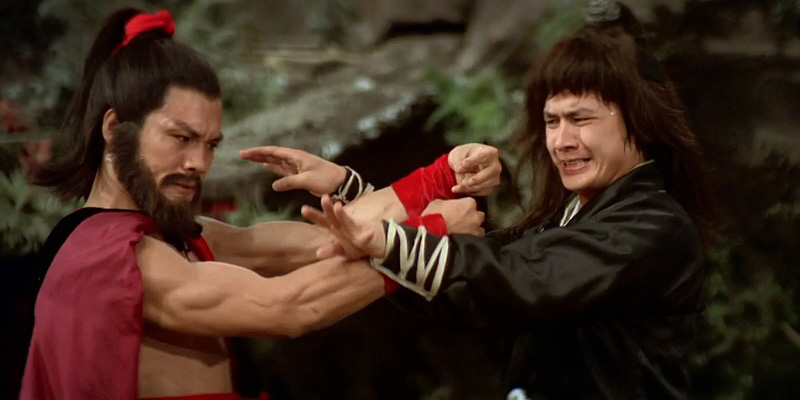 When Guo and Yong do find the doctor, former Emperor Yuan (Ti Lung), he proceeds to cure the latter and then explain in some detail why he is now a recluse. This takes up a good chunk of the film, but is rather entertaining especially because we see a bit more of loopy Po-Tang when he was a young pup. After their little sojourn, the two lovers descend the mountain to find the Iron Palm chief waiting for them, flapping his mighty red cloak with aplomb. What follows is probably the best extended action scene in all of the ‘Brave Archer’ films as the four bodyguards of the doctor (counting three Venoms in their number!) fight the Iron Palm’s four best killers. Meanwhile Fu Sheng and Lo Meng go toe-to-toe in their long-awaited showdown and Philip Kwok arrives on the scene carrying a bunch of flowers (don’t ask). ‘Brave Archer 3’ concludes with another strand of loose ends flapping in the wind and without even mentioning Ouyang Feng, the Weird Six and a whole host of other people that populated previous chapters.

Yet convolution, confusion and disorientation are part of the charm of the ‘Brave Archer’ trilogy. It’s a bit like being introduced to Shakespeare long before being mature enough to handle all of the flower speech (something we’ve all faced during our teens); the charm is the style and the larger-than-life characters who march onto stage bellowing all kind of threats to anyone who’ll listen. There are a few impressive fight scenes but even here the entertainment is derived from the absurdity of the styles on display. The three films are also full of the great and the good of the Shaw Brothers studio meaning five and a half hours in their company leaves a little smile on ones face. Although it’s difficult to recommend this dense, baffling world to non-wuxia fans, I felt an odd emptiness having concluded the trilogy. Of course I will plunge into the aforementioned spin-offs, but my heart will still be with Guo, the Weird Six, Ouyang Feng and lovely Peach Island where I hope to be buried.

Latest posts by Andrew Saroch (see all)
The Brave Archer