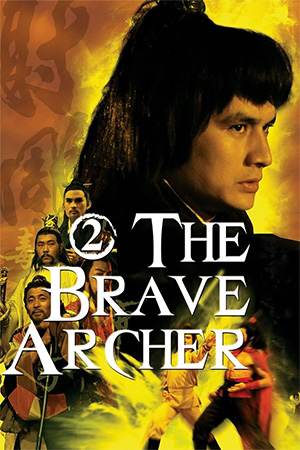 ‘The Brave Archer 2’ is the second film of a trilogy adapted from Jin Yong’s acclaimed novel ‘The Legend of the Condor Heroes’ (AKA ‘Legend of the Eagle Shooting Heroes’), which itself is the first book of the ‘Condor Trilogy’, also comprising of ‘The Return of the Condor Heroes’ and ‘Heaven Sword And Dragon Sabre’. This second instalment contains a notable change of lead actress as Tien Niu from the first film reportedly broke a limb, resulting with her being replaced by Niu Niu. Niu Niu would keep the role for ‘The Brave Archer 3’.

In the first instalment we left Kao Tsing (Fu Sheng) the victor, winning Huang Ying’s (Niu Niu) hand in marriage. Since then Chao Pai Tung (Kuo Chui) had informed Huang Yaoshi (Ku Kwan-Chun) that it was he who had taught Tsing the contents of the book, which was in fact the Jiao Jin manual, allowing him to win Ying’s hand in marriage. Believing that Tsing had lied to him, Huang Yaoshi expels him from the island. However Western Poison Ouyang Fung (Wang Lung Wei) captures Ying and agrees that he will only release her if Tsing dictates the contents of the Jiao Jin manual. Tsing agrees, but on the advice of Nine Finger Beggar Hung Chi Kung (Ku Feng), he makes his own changes to the script making it useless. But when Tsing tries to leave Ouyang Fung attempts to kill him anyway, and after getting involved Beggar Hung Chi Kung receives a strike from behind, thus crippling his Kung Fu. Beggar Hung then passes on his position as Chief of the Beggar clan to Ying, and hands her the sacred staff of the Beggars. She later loses the staff to Yang Kang (Li Yi-Min), who poses as the new Beggar Chief in a bid to weaken the Sung Patriots.

‘The Brave Archer 2’, like its predecessor, is a complicated bombardment of characters and sub-plots. This naturally makes it tough viewing on a first time basis. However, this sequel is somewhat more forgiving than the first ‘The Brave Archer’ as many of the characters have now already been established in the first film so it becomes less a case of trying to keep tabs on who’s who. The fact that the above synopsis only really covers the opening ten minutes of the film however, is an example of how much content and sub-plots exist throughout its runtime. There are a few flashbacks from the first film which is helpful, but it might prove a bit much to take in for someone who has not seen the first ‘The Brave Archer’. Interestingly, the flashbacks contain footage and events not to be seen in the first film. Whether or not they were ever seen as part of the first feature is another matter.

Fu Sheng has certainly had much meatier roles, and ‘The Brave Archer’ series doesn’t ask much of his acting skills. This is pretty much an acting by numbers exercise for him. There is little character development for his role of Kao Tsing, as the role serves as more of a tool to link the variety of sub-plots together. Niu Niu fits well into her role, and gives a more mature performance compared to spirited, more juvenile performance of Tien Niu in the first instalment. Generally everyone acquits themselves well, but it is veteran Ku Feng who shines above the crowd again despite taking less screen time in this instalment.

‘The Brave Archer 2’ is probably the most action heavy of the trilogy. Fu Sheng features in very little of it though as he spends the bulk of the movie injured, as the characters of Tsing and Ying observe from a hidden room as all the other sub-plots play out. During this period virtually every other major character partakes in a bit of conflict and in a trilogy that contains at least twenty-five major characters that leaves a lot of room for conflict. The action is handled well by Robert Tai, Lu Feng and Leung Ting, mixing the supernatural wuxia style with more traditional ground based action.

‘The Brave Archer 2’ can be enjoyed as a film in its own right but having seen the first part makes it a richer experience. Essentially the trilogy is just one long feature split into three parts and is best viewed as such. But given the complicated source material it was never going to make a smooth transition to celluloid. Therefore it can not be regarded as a classic of the genre, but can be hailed as a valiant attempt at faithfully adapting difficult source material. It doesn’t rank as a must see but it’s well worth a watch.