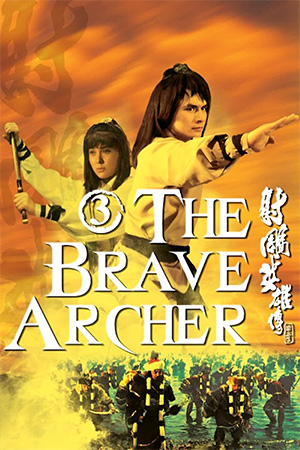 ‘The Brave Archer 3’ is the final part of Chang Cheh’s adaptation of Jin Yong’s ‘Legend of the Condor Heroes’. An adaptation that it quite faithful to the original source material. There are of course some subtle changes and omissions as are common with big screen adaptations from literary works. Perhaps the biggest omission from this series is the presence of Genghis Khan who was a major character in the novel. However since his character has little effect on the main narrative, it is not such a detrimental omission. In fact another major character may have even made ‘The Brave Archer’ an even more challenging viewing experience.

A painting that Tsing (Fu Sheng) and Ying (Niu Niu) discovered in the previous instalment, was found to contain information on the whereabouts of General Yue’s Posthumous book. It states that the book is located in the Iron Palm Clan’s headquarters. While retrieving the book Ying is seriously wounded as she is struck from behind by Iron Palm Clan leader Qiu Qian Ren (Lo Mang). On escape they come across the hut of Auntie Yee (Ching Li), who’s hospitality is cut short when she discovers who Ying’s father is. She does however tell them to find Southern King Emperor Duan Zhi Xing (Ti Lung) who has the power to save her. After making their way up the mountain and having to pass Duan’s four disciples one by one, Duan agrees to help her against his disciples wishes. It becomes apparent that by saving Ying, Duan will lose his internal power for five years making him venerable to attack. This is in fact Auntie Yee’s plan as she holds a deep rooted grudge against Duan.

Of the three films in the ‘The Brave Archer’ trilogy, this instalment feels more like a solitary film. The pacing is much more leisurely and the new characters are not thrown in at breakneck speed. It also leaves more time for character development as it spend much time exploring the background of Emperor Duan. In many ways Ti Lung and Li Ching have the central roles as these are the ones that are given depth and emotion. So one might think that this might be the best in the trilogy. Not necessarily so.

As I have already mentioned the pacing is much more leisurely. And it certainly feels more leisurely. If viewed straight after the first two instalments it feels downright slow in comparison. It could be argued that this is not helped by the action being more sparse than in the previous instalments. In fact the vast majority of the action is left for the final reel, cue a showcase for the Venoms, and executed in typical Venoms style. Yes all five Venoms can be seen in the final showdown, which has the rare distinction of Sun Chien wielding weapons.

There is even more references to Taoist formations than in the previous two films. This becomes quite mind boggling, when Taoist mathematic formulas and solutions are churned out at such a velocity, that surely only a genius could keep up with. This is an aspect of the film that makes it less accessible to western audiences.

‘The Brave Archer 3’ also sports an unsatisfactory ending. While it may tie up the issues created in this instalment, it appears to ignore most of the events created in the previous two instalments. This is one of the factors which makes it feel like more of a standalone film. Thankfully the final chapter spills over into ‘The Brave Archer and His Mate’. It therefore could be argued that it is in fact a quadrilogy as opposed to a trilogy. However only the first half hour of ‘The Brave Archer and His Mate’ covers the end of ‘Legend of the Condor Heroes’. The decision to not include the ending of the source material was most likely so that ‘The Brave Archer 3’ would end with a big action set piece in the tradition of the genre.

Overall, I felt that ‘The Brave Archer 3’ is the weakest of the trilogy despite some of its traditional narrative improvements. The three films are of course better if viewed as one long film, but that is partially the undoing of this third instalment due to it’s comparatively slow pacing following the hectic earlier instalments.