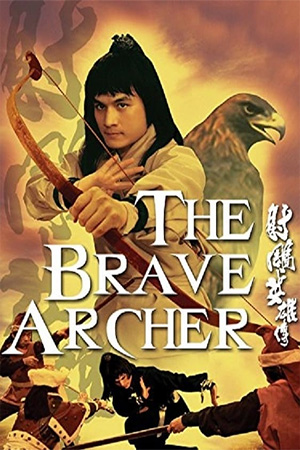 Imagine taking a famously complicated novel and making it into a star-packed 2 hour film. Then imagine a DVD version being released with at least thirty minutes cut out. This baffling DVD version is the one reviewed here.

An orphaned child is ‘adopted’ and raised by a group of kung-fu masters who decide to teach him their respective skills. When he grows up though, he proves to be far from proficient at kung-fu, much to the frustration of his teachers. He therefore decides it is time to travel and attempt to further his experiences. His first escapade sees him encounter a mischievous beggar who he takes pity on and pays for when in trouble. The beggar is not what he seems though and reveals himself to be a she. She’s also not just any she, but the daughter of an influential official known for his incredible kung-fu. Before trying to win her hand in marriage – a decision not too popular with his masters – ‘The Brave Archer’ goes on his travels again and studies with a few new kung-fu masters he meets. By the end of his training, the student is finally proficient enough at kung-fu, but this will not help him pass the three tests needed to win the hand of the girl he loves.

Chang Cheh can direct kung-fu dramas of an epic scope; as was seen with the excellent ‘Blood Brothers’, Cheh can flesh out characters and plots within a complex context. With ‘Blood Brothers’ though, Cheh concentrated the scope on the major narrative and didn’t try to fill in all of the viewer’s knowledge about the historical setting of the film. Unfortunately ‘The Brave Archer’ is one of Chang Cheh’s least assured efforts as he foolishly tries to fit in all of the sub-plots and characters of this vast novel. Naturally this makes for difficult viewing with scores of characters appearing and re-appearing with little development or consequence. Fu Sheng and most of the cast acquit themselves well in the production, but it is impossible to become absorbed in such a convoluted plot. Without the coherence and maturity that Chang Cheh usually weaves into his films, this is a definite waste of an all-star cast. Matters are not helped by this severely cut DVD version which makes things even worse; huge gaps appear in the film, so much so that characters refer to things that the viewer never saw. The original version would probably be slightly better, but this is still a lost cause. Scrapes three stars for its all-star cast, but nearer to two-and-a-half.