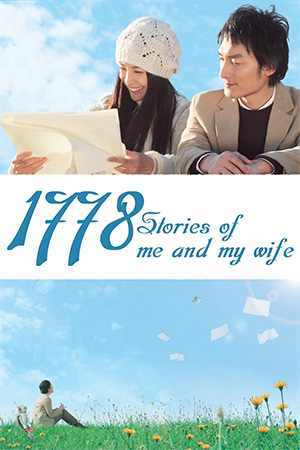 Struggling science fiction writer Sakutaro finds interest in his genre of choice is on the wane and is encouraged to try romantic fiction by his publisher. Refusing to do so despite the financial restraints it puts on him and his wife Setsuko, the writer vows to stay true to his craft. Such matters are put starkly into perspective when Setsuko is diagnosed with colon cancer and her chance of recovery is slim.

Sakutaro feels powerless, but finds an outlet for his frustrations in his short stories which also encourage his wife. Seeing the benefit of keeping her spirits up, the writer vows to write a new short story for her every single day until she beats the illness. What starts off as a form of catharsis quickly spirals into a quixotic challenge as he tries to balance his personal writing with his work for the publisher and, most importantly, help for Setsuko as she battles cancer.

‘1,778 Stories of Me and My Wife’ would seem a little far-fetched if it wasn’t actually based on a true story. The experience of Taku Mayumura, one of Japan’s most appreciated sci-fi writers, is embellished a little for the big screen, but such an incredible feat of love is a perfect subject for film drama.

Japanese films that centre on terminal illness invariably start at a leisurely pace, gently introducing the characters before the big narrative pivot. ‘1,778 Stories of Me and My Wife’ follows this formula adroitly and despite the spectre of cancer always on the horizon, the viewer is able to understand the characters before it strikes. As Setsuko’s diagnosis is quite early in the story this period of repost creates a pleasant harmony for the rest of the duration.

The film mixes live action with computer animation designed to bring Sakutaro’s thoughts to life. While the former is nearly always pristine, the fantasy elements don’t always gel as comfortably and occasionally prove to be unwelcome intrusions. This surrealism should be an important part of the story, but the polished computer graphics do not lend themselves to the overall tone. A rougher, more personalised animation would probably have suited the narrative more than that which is used, yet in this foible is still minor in light of what is an excellent film.

J-Pop star Kusanagi is a solid lead (despite looking much younger than his 37 year age) while Takeuchi is just the right mixture of gumption and vulnerability for the role. Director Hoshi is also careful to let his performers show their mettle rather than interrupt with moments of sweeping drama and this is to the film’s credit. ‘1,778 Stories of Me and My Wife’ is an extraordinary story about how ordinary people cope with the very worst that can happen and how love is a remarkable bond. That may sound corny or sentimental, yet many who are unfortunate enough to have experienced chronic illness from either perspective will know exactly how true this invariably is.