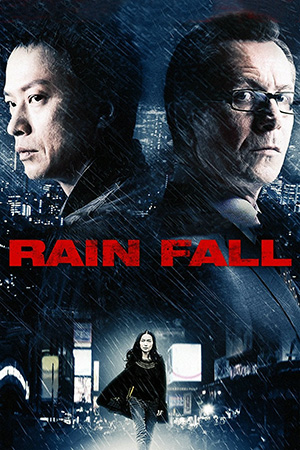 A slick looking thriller set and shot in Tokyo, ‘Rain Fall’ had all the makings of an exciting Bourne type action ride but unfortunately ends up as a dull, dreary and often pompous experience. Based on the first in a series of novels by Barry Eisler, ‘Rain Fall’ sees covert spy/hitman/Navy Seal trainer/all-around-badass John Rain (Shiina) doing battle with nefarious CIA bod Holtzer (Oldman). Holtzer is after a memory stick with incriminating information on it which was in the possession of Rain’s latest victim. Realizing Holtzer is a bit of a bad egg and up to no good, Rain searches for the stick as well. In addition, he must protect the daughter of the slain target and the two go on the run across Tokyo pursued by the corrupt CIA.

Well, I say go on the run but it’s more of a leisurely stroll really. ‘Rain Fall’ suffers from never being overly concerned with, well, being very thrilling. Decent set up, decent cast, decent production values and a cool Tokyo setting are all let down by a snail’s pacing. Not that every thriller about super spies and agents has to be rammed with action and chases but when you have people on the run and corrupt CIA officials as part of your set up a certain amount of thrilling escapades is expected. Sure, there are few short and sharp hand-to-hand fights peppered throughout but it hardly makes up for the lack of urgency. In addition, the emotional punch just isn’t there either. John Rain, despite Shiina’s best efforts, is just a dull character, sharing little chemistry with the lady he has to protect and rarely given opportunity to convince the viewer he is this great soldier we are repeatedly told he is. In fact, the character spends a lot of the running time just wandering around Tokyo, looking smart in designer threads and looking soulful with his hands in his pockets.

Good old Gary Oldman attempts to inject life into proceedings by chewing up the screen and shouting a lot. He is a great actor but underused here and spends most of the time staring at video camera screens, shouting “take the shot, take the shot.” There is some promise with an aging police detective (Akira Emoto) on the trail of Rain, Holtzer and the missing memory stick but that fizzles out like pretty much everything else. Scenes drag on longer than they need to and everything is so po-faced and wanting to be taken seriously all the fun that could have been had has been bled dry. As mentioned the film does look slick, it’s always good to see Oldman on screen and the Tokyo setting is a refreshing change for this type of flick. It’s just ‘Rain Fall’ could have been so much more with only Oldman completists and avid fans of spys/hitmen-on-the-run flicks likely to get much enjoyment from it.