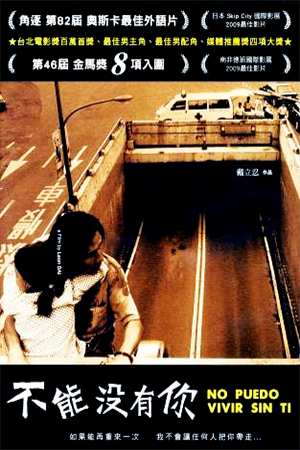 In the industrialised Taiwanese port of Kaoshiung, a single parent struggles to raise his seven year old daughter in exiguous circumstances. Loving father Li Wu Hsiung keeps little Mei by his side as he earns a meagre wage from occasional work fixing the hulls of the boats in the harbour, unaware that the social services are beginning to close in. When they do catch up with downtrodden Li, they inform him that the mother of his daughter has subsequently married another man and his rights as a biological parent may be under threat. Out of his depth in a bureaucratic world and hopelessly lost in the legal issues involved, the confused father seeks help from an old friend in Tai Pei who has risen to a prominent position in the government. This, unfortunately, is just the opening round in an increasingly convoluted battle to keep Mei while also making sure she gets proper schooling.

Inspired by the true story of a desperate father who dangled precariously near the edge of a busy overpass with his child in his arms, ‘No Puendo Vivir Sin Ti’ is the kind of worthy film that always impresses judges at awards ceremonies. Yet there’s nothing calculating about this bleak and intentionally frustrating work – it never makes it easy for the viewer to just be sucked into the emotional trauma involved. Shot in stark black and white, this is an attempt at docudrama that is every bit as bedraggled as its main protagonist. It hebetates the viewer with its locations and maddening sense of isolation until we can truly sympathise with the story at its heart.

The actual story – the moment that begins the narrative – that made the news was apparently gobbled up by the media on the day of the dramatic denouement, held viewers in a state of shock and was subsequently forgotten by the next day. Another major incident had been pushed off the television news by the latest headline and would be of little importance to anyone not directly involved. Admirably, director/producer Leon Dai and his star and fellow producer Chen Wen Pin refuse to let the matter die, trying to explain what led to this flashpoint and what subsequently happened. Not a great deal is revealed initially and Leon Dai makes it purposely awkward as the viewer sees a man in complete privation without knowing what has led to this. As it turns out though, the subject matter builds into quite a rousing piece even as it avoids any tub-thumping polemic. Scenes of Li completely overwhelmed by the surroundings of the big city and constantly belittled by suitably indifferent bureaucrats is powerfully emphasised as the film moves to its conclusion.

Taiwanese cinema is enjoying a renaissance with the financial success of ‘Cape No.7’ and numerous other productions making a splash in Asia.  ‘No Puendo Vivir Sin Ti’ (or ‘I Can’t Live Without You’) has a different aim to its contemporaries as it highlights a case long since forgotten about by the media and does very little to make the experience ’comfortable’ – not that it needs to be in order to be appreciated. Chen Wen Pin and his on-screen daughter are excellent in the films two most important roles, bringing a humanity to characters who represent a sad underclass in Taiwanese society.  With Leon Dai’s patient technique alongside these, this drama manages to be an interesting and occasionally moving piece of social realism.