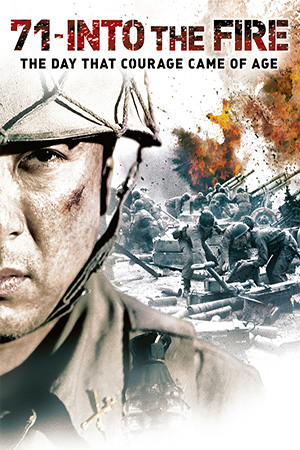 This slick looking and battle charged war film doesn’t stray too far from the well worn war movie path but certainly tells an inspiring and conflict heavy tale from the Korean War. On August 11th 1950, 71 student soldiers held back the marauding North Korean army, holding an important strategic stronghold, to give the South Korean army the tactical advantage. The 71, few of who had seen extensive combat, were tasked with holding an abandoned all girls school and the surrounding area in Pohang against hundreds of marauding North Korean soldiers until the South could get reinforcements to the region. With little time to weapons train, nerves taking their toll and with so few of them to stand against the fire power of the North Koreans, the 71 stand strong in an epic battle of bravery.

Revelling in impressively staged and technically superior war combat, but never shying away from the horrors of such warfare, ‘71: Into the Fire’ shows military conflict in all its horror and glory. While not reaching quite the same superior heights as War epics ‘Assembly’ and ‘Brotherhood’, ‘71: Into the Fire’ is nevertheless a finely made film, telling a stirring story of true bravery that walks a fine line between gritty combat horror and blockbuster entertainment. On the blockbuster front, the film is very slick (many of the camera movements and compositions are incredibly fluid and beautiful to look at) with a sort of Hollywood gloss meaning there is no doubt the budget is up there on the screen. On the gritty side, the war action and violence is often uncompromising in nature, really showing the bloody nature of battle and how these 71 non-soldiers really suffered to, quite literally, hold the fort. The film is often a technical marvel in the combat scenes, the viewer thrown straight into it from the get go, to the various skirmishes the students must endure and to the relentless final battle which really doesn’t hold back in pummelling one with visceral war combat.

On the blockbuster influenced side of things again, one can’t help but feel certain aspects have been embellished for dramatic purposes. While the story of the 71 is a fascinating tale of bravery that deserves to be heard, certain parts (such as the antagonistic relationship between the two leads and the full on evil nature of the North Korean general) seem heightened for conflict purposes. The sub plot of the tension between the student put in charge of the 71 (finely played by Choi Seung-Hyun) and the rebel bad boy who joins the group and doesn’t want to take orders, just comes off as unnecessary and stale: there is enough going on already with the would be platoon learning to fight, trying to survive and enduring intense combat that proceedings don’t really need this extra divergence. However, if this quarrel between the two characters was indeed a true aspect of the situation then I apologize for branding it a dramatic fabrication: it’s just one of the few characteristics of the narrative that comes off as a little forced and needless.

‘71: Into the Fire’ is still an impressive and absorbing tale of heroics and war combat, and an interesting look at a group of very brave people put into a frightening and violent situation, and finding the courage to stand up and defend.