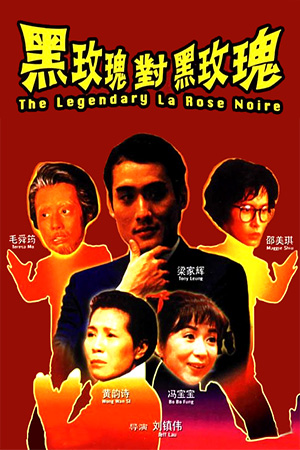 During a clandestine meeting between two groups of gangsters, two innocent women happen upon this secretive deal. They also manage to witness the ensuing murders that take place and are only to survive the situation after the killer flees the situation with the police alerted. The friends are aware that their story has little chance of convincing the authorities of their innocence and so they leave a note at the scene claiming it is the work of the ‘Black Rose’, the fictional heroine of 60s Hong Kong cinema. However, the ‘Black Rose’ is not an imaginary figure and her two most capable students decide to kidnap the two women who have insulted their mistress’ name. Also thrown into this chaotic situation is slick-haired, high pitched detective Keith Lui (Tony Leung Ka-Fai), who secretly nurses a crush on one of the women, and a gang of criminals keen to erase the witnesses to the original murder.

There is little doubt that those unfamiliar with 60s Hong Kong cinema (like myself) will be at a definite disadvantage in attempts to appreciate ’92 Legendary La Rose Noire’. Jeff Lau’s affectionate parody is strongly reliant on its viewers’ knowledge of the styles it lampoons and most of the potential belly laughs are absent if this isn’t the case. For example, Tony Leung’s voice raises a smile due to its bizarre tone, verging on a strangled pig; however, it is only when I read the back of Mei Ah’s remastered DVD that I discovered that it is intended as a mockery of 60s Hong Kong idol Lui Kei’s unusual delivery. Such genre-appreciation may elude many Western fans and so the main question is as to whether the film still retains an entertainment value despite its parochial nature.

While ’92 Legendary La Rose Noire’ is difficult to fully appreciate without an extensive grounding in its inspiration, there are nevertheless enough moments of enjoyment to increase its wider appeal. Though there are few chesty laughs on offer, the sheer vibrancy of the production is definitely effective and ensures that most of the fun the cast are having is infectious. Tony Leung, in particular, shines as the over-the-top Keith Lui – the mixture of campish mannerisms and rigidly slicked hair creates a character that is a good central figure for the audience. Though Leung’s outrageous acting would usually be detrimental, here it is essential. Award winner Petrina Fung is ludicrous – intentionally so – as one of Black Rose’s disciples; again, her performance does get somewhat grating as the film rolls along, but this may be due to the lack of my knowledge of its source material.

With films of this nature, director Jeff Lau has made his name and its general tone is what is expected of his work. Colourful, genre-defying and almost out-of-control, ’92 Legendary La Rose Noire’ is one of the better examples of Lau’s talents. Though it verges on the ‘mai-le-tou’ comedy that is an acquired taste, it just about retains its balance. The comedy is often well observed and, surprisingly, there are a few moments of slick action. Choreographer Leung Siu-Hung (the THIRD Tony Leung) retains that unique Hong Kong ability of making non-martial artists look confident during action scenes, with the finale standing out as a good example of short, sharp fighting fury.

The wisest advice to offer anyone with regards to this films is that if you don’t like preposterous comedy, ’92 Legendary La Rose Noire’ may not be a recommended movie to buy. However, if any viewer has been brought up on the Hong Kong musicals that Jeff Lau’s work alludes to, this will be highly recommended. Whichever camp you fit into, there’s little doubt that Jeff Lau has rarely been more confident in the director’s chair.