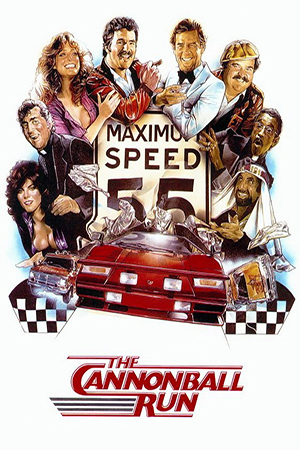 J.J. McClure (Reynolds) is a wealthy businessman with a hankering for the extreme adrenaline rush.  Assisted by his good friend Victor (DeLuise), he decides to enter the annual race known as ‘The Cannonball’ where drivers from all corners of the globe come together to compete in a race from Connecticut to California.  There are no real rules as the only objective is to get there as fast as you can without being stopped by the police or killing yourself along the way.  You can never tell who could win but you know that it is going to be one heck of a journey finding out.

The inclusion of ‘The Cannonball Run’ on an Asian movie review site is probably something of a surprise to most. However, the fact that both Michael Hui and Jackie Chan appear amongst its expansive cast list makes it a possible purchase for Hong Kong movie completists.  As for my opinions on the movie, well that’s slightly more difficult as it can really be separated into two possible categories for recommendation.

The first of these would be to examine it from the point of view of someone hoping to see two of the East’s biggest stars, Chan and Hui, appearing together in their first Hollywood movie.  Well, for those of you expecting this, I’m afraid it’s going to be a fairly big let-down. Chan and Hui are bundled into stereotypical “oriental” roles as two Japanese drivers (although they spend the entire film talking to each other in Cantonese) with a prototype supercar that contains some exclusive technology.  Hui is the computer wiz who coordinates things from the backseat, while Chan is the driver as well as the muscle of the outfit.  To be honest, they receive very little screen time and Chan’s five minutes of fame are short-lived as he is gets a brief fight with some Hell’s Angels just before the film’s finale.  The action is not brilliantly handled and it lacks impact sound effects which makes the whole thing seem far more staged than it should.

Alternatively, you can view ‘The Cannonball Run’ as a 1980’s comedy with some crazy driving, an easy-going story and plenty of entertaining gags.  It may not be all that original or the funniest film ever made, but there’s some great chemistry between a number of the actors (particularly Reynolds and DeLuise) and each of them is more than willing to send up their established images. Director Hal Needham, who also worked with Reynolds in ‘Smokey And The Bandit’ and ‘Hooper’, has a very distinctive style that has echoed throughout his features. Cars or big vehicles generally feature and nothing is taken all that seriously, but somehow it all brings a smile to your face.  Throw in some well-handled car stunts and a couple of bar room brawls and you have a very fun movie on your hands.

Your enjoyment of the ‘The Cannonball Run’ is entirely dependant on your expectations. If you’re an Asian movie fan hoping to see Chan kicking butt or Hui cracking wise, then you’re likely to be somewhat disappointed.  On the other hand, if you enjoy a cheesy slice of American comedy that features fast cars and some top talent, then it’s definitely going to please.