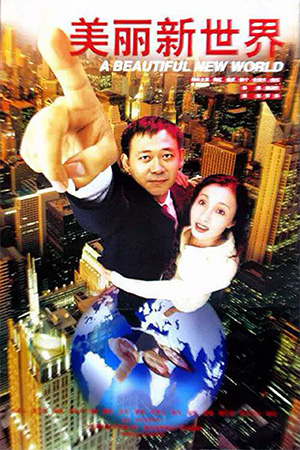 While there are many facets to the films of Mainland China, one particular ability they seem to embody is an affinity with ‘ordinary’ people. With widespread use of the kind of social realism that became the hallmark of 60s British cinema, films such as ‘King Of Masks’ and ‘Postmen In The Mountains’ have managed to tell earthy stories in a spellbinding manner. Importantly, though, China has always succeeded in presenting the toils of the working person without any need for epic human drama or widespread incident – a skill that has seen the film-makers of said country master their genre. Though it is hardly the pinnacle of this film-making school, ‘A Beautiful New World’ is uneventful in a majestic way.

After winning a contest for a brand new flat, naive country bumpkin Baogen travels to Shanghai to claim his prize. Unfortunately he discovers that the flat has not even been built yet and will take another 18 months to complete – leaving him stranded in Shanghai. Baogen decides to stay with his distant relative in one of Shanghai’s suburbs, but finds that she has sadly died leaving her irresponsible, debt-ridden daughter in charge. The daughter – Baogen’s aunt – agrees to let the stranded newcomer stay, but is quite ready to charge him for the ‘privilege’, draining what’s left of his funds. Despite his apparent difficulty adjusting to cut-throat Shanghai life, Baogen decides to use his initiative and sell lunchboxes to the workers in the city centre, a business plan that slowly pays dividends. His aunt is a day-dreamer though and constantly criticises her nephew’s realistic attempts to scrape together a living, while she squanders her money on get-rich-quick schemes.

‘A Beautiful New World’ is a character-driven piece that is devoid of any great emotional climax or tragedy – this is both an asset and a flaw in the overall production. On the positive side, it ensures that the realism of the storyline is galvanised while still connecting with its audience. Despite the lack of a real focus, the trials and tribulations of the lead character become strangely fascinating and his eventual enterprise is a pleasure to behold. There’s something quite appealing about Baogen; his naivety is initially his downfall, but director Shi Runjiu gradually explores the hidden strengths of his character.

The episodic narrative is advantageous in presenting realism, but it does mean that there is often a lack of impetus. Some scenes seem redundant, merely present to pad the running time out while other moments are needlessly cut short. It’s also difficult to feel anything but contempt for Baogun’s aunt, a character whose conniving nature is very difficult to warm to. As she constantly belittles the leading character, the viewer is frustrated by his inability to defend himself. Though the final ten minutes is supposedly the turning point for her character – her redemption – she remains a real thorn in our hero’s side. Naturally most of this personality clash is intended to create friction, but 90 minutes of her petulance is a bit much to take.

Shi Runjiu’s film is a modest production with flaws in certain key areas, but remains a genuinely interesting film. The Shanghai locale is gritty and far removed from the glorious portrayal of the city in Wilson Yip’s ‘Leaving Me, Loving You’, yet still plays a key part in the story’s stronger moments. With sterling use of this fascinating landscape and a leading character whose humility helps paper over a few of the film’s cracks, ‘A Beautiful New World’ is an intriguing proposition – though hardly China’s finest cinematic export.