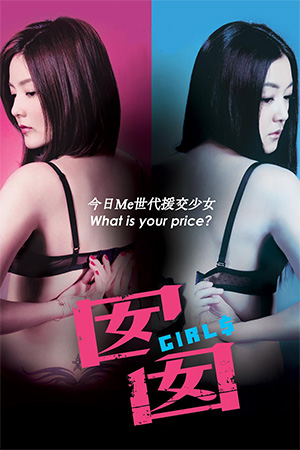 Nineteen-year-old Icy (Michelle Wai) is a canny business woman, but her line of work is few would consider undertaking at her age. Icy runs an online “paid date” service, whereby young single men pay her for girls in their age-bracket to go on dates thereby circumventing them the trouble of finding willing social partners of their own. For a little extra, sex can be thrown into the equation, in turn making Icy’s line of work not that far removed from a brothel madam and her girls from prostitution. When sixteen year old schoolgirl Gucci (Venus Wong) wins an online auction for a limited edition handbag of her namesake, she realises that her modest allowance and savings will never cover the cost of her bid, so hesitantly she turns to Icy and her lucrative inroad to instant cash.

In the meantime, Icy’s long-time online chat buddy, Ronnie (Bonnie Xian), a young woman from an extremely wealthy family, has also turned to the paid date business; yet more out of boredom in her privileged life than anything else. Once in Icy’s employ and friendship, Ronnie and Gucci meet her top-earner, Lin (Una Lin), a Taiwanese immigrant whose love of the job’s optional extra has made her name on the circuit but left her wanting in the relationship department. However it’s scarcely as easy as it sounds, and Icy not only manages a strained relationship with her boyfriend, Chun (Derek Tsang), but also has the mystery disappearance of best friend Silver (Ivy Choi) to deal with. Could Silver be the victim of a serial killer rumoured to be preying on prostitutes? And what will Gucci’s brother (Deep Ng) think once he discovers how his little sister has been earning some extra pocket money?

The prostitute drama, as well as its offshoot focal on hostess bars, are a sub-genre of Hong Kong cinema almost as parochially unique as the territory’s seeming obsession with gambling films and, surprisingly, are not as recent a phenomenon as one would suspect (see: footnote below). Although prostitution is legal in Hong Kong, organised prostitution (such as brothels) is not; thereby the activities of employees and clientele alike of those dens of iniquity have made for vicarious cinematic fodder in the region’s film industry for the better part of forty years. Award-winning director Kenneth Bi’s (son of sixties Shaw Brothers icon Ivy Ling Po) third major feature ‘Girl$’ (2010) updates the sub-genre for the internet generation and explores the emergence of (the Japanese-originated) trend of “compensated dating” (or Enjo Kosai) since its existence made domestic tabloid headlines in 2009. As compensated dating, or “paid dates” as they are referred to in the film, fall outside of Hong Kong’s organised prostitution legislation (and the sexual component is purely optional at the discretion of the parties involved), it is this grey area that Bi somewhat hesitantly explores.

Worlds away from his award-winning Singaporean-lensed familial comedy ‘Rice Rhapsody’ (2004) (which is warmly recommended, by the way), Bi populates this young adult drama with a wealth of principle characters and variety of engaging social issues and concerns raised by ‘Girl$’ central theme, but unfortunately never really explores any of them with the depth one would expect of the varied subject matter. Frustratingly, some plot threads are raised at the film’s outset, only to be eventually forgotten or left to disappear into the background with little to no resolve. Foremost of these is the appearance of serial sex predator preying on girls within the compensated dating circuit; whilst this thread gives rise to the grotesque murder and dismemberment of a girl ala ‘Dr. Lamb’ (1992) under the film’s opening credits, it remains a red herring that peters out as the lives of the titular characters unfold. The only interconnection with the serial killer episode is the unspoken fate of Icy’s friend Silver, and her appearance in her dreams as a ghostly apparition (that signals something untoward may have happened to her). And that’s just one of the many issues and narrative threads that ultimately end up going nowhere, as Bi seems more concerned in presenting a simple snapshot of the girls’ lives than committing to a whole and conclusive timeline. It’s a brave move as a means of fragmentary storytelling, but one that works against the film collectively in the long run.

Within the film’s leading actresses (and actors), Bi again sidesteps convention by (apart from Derek Tsang, son of Eric), populating his cast predominantly with newcomers and unknowns. Michelle Wai (Icy), of Heiward Mak’s ‘ex’ (2010) and ‘Hot Summer Days’ (2010), and Bonnie Xian (Ronnie), previously in Herman Yau’s ‘Split Second Murders’ (2009) and Barbara Wong’s ‘Break Up Club’ (2010), are both merely perfunctory in their roles, but that seems more down to the depth of their scripted characterisations than lack of ability (as both have showed contrary prior). Chinese actress Una Lin (Lin) appears to have been cast as she was the only actress who would agree to either nudity and/or the film’s occasional torrid sex scenes. However, Venus Wong as Gucci manages to outshine all of her co-stars; primarily due to the fact that hers is the only character afforded anything resembling depth by way of the screenplay. The aforementioned Tsang (‘Dream Home’, 2010) doesn’t have any great stretch of his abilities, as all that is required of his character is to play video games, laze around and occasionally vent his spleen or look grumpy and/or bored. Accordingly, the viewer never really connects with any one character as they are all merely line sketches where full bodied and developed characterisations would have made them more sympathetic, or at least modest mirrors of reality.

Offset against the film’s many limitations, Bi at least engages current technology as a means to propel forward his slim narrative as well as heighten (perhaps hoping to gloss over) that same narrative’s many flights of fancy and limitations. Director of Photography Sam Koa, who previously worked with Bi on ‘The Drummer’ (2007), treads a fine line between CG-enhanced pop visuals and the more sombre hues of the story’s darker corners. Bi’s double duties as editor undoubtedly assist with the slick, contemporary style and veneer of the production; his quirky overlays of internet chat icons and avatars, lines of onscreen text, and usage of computer-themed pop-ups actually gives the film a vibrant, stylised look that belies the oft-empty content beneath. As for Hong Kong rapper and hip-hop producer Ghost Style’s soundtrack, there are passages where it works well in line with the visuals but mostly it’s just a collection of clichés and tropes of its genre that prove neither catchy, memorable or much more than underlay to Koa’s pretty images and Bi’s creative editing. Like the majority of the exercise, it’s all a bit flat once given space to breathe.

For a production that never shies from the sexual component of its narrative, ‘Girl$’ is commendably (or negatively, dependent on one’s own leanings) non-exploitative of that element, which in turn is indicative of the work as a whole; by attempting to play virtually everything both ways Bi ends up sitting firmly on the fence somewhere in-between. Neither pandering to the sub-genre’s sometimes exploitative extremes ala Matt Chow’s ‘PR Girls’ (1998) nor given over to the nihilistic melodrama at the opposite end of the scale, as with David Lam’s ‘Girls Without Tomorrow’ (1988), Bi just ends up with a modest contemporary update of a tried and true formula. Forged from the latest “hot-button” topic, ‘Girl$’ is a largely disappointing exercise, riddled with almost as many loose ends and unresolved plot strands as the very issues and concerns it raises in relation to its tabloid subject matter. The fact that AIDS is belatedly shoehorned into the story, at the eleventh hour, solidifies just how scattershot the script really was (even with the collaboration of four writers). Any way you approach it, the multitude of flaws inherent within ‘Girl$’ outweighs its handful of pluses and it remains a (sadly) vapid entry within its given sub-genre.