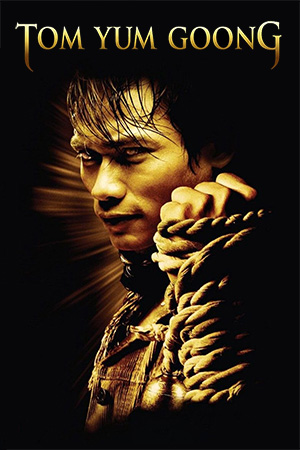 When ‘Ong Bak’ was released in 2003, the film was heralded by many for introducing a new action movie messiah in the form of Tony Jaa.  This young Thai actor showed a spark that many had thought to be extinct within the action movie hemisphere as he demonstrated an impressive on-screen presence combined with an extraordinary ability in the Martial Arts (not to mention a willingness to suffer a few cuts and bruises for the sake of his art).  The huge buzz surrounding Jaa and ‘Ong Bak’ naturally meant that a follow up film would be on the cards and it wasn’t long before ‘Tom Yum Goong’ came to fruition. But, does it live up to all the hype or was ‘Ong Bak’ a one hit wonder?

Kham (Jaa) and his father live the simple life in the heart of Thailand, raising two beloved elephants who they hope will eventually be offered up as a token of their love for the majesty of Thailand.  However, before they are able to fulfil their destiny, the elephants are stolen by an international Mafia syndicate who smuggle them out of the country.  Kham is furious and decides to follow the gang to their native land of Australia in an effort to bring the missing members of his family home.  Once there, Kham finds himself being chased by both sides of the law despite doing nothing wrong and it doesn’t help that he has no grasp of the English language.  Luckily for him, he manages to beat the information out of members of the gang and it isn’t long before he is hot on the trail of his elephants.  Now Kham must go head to head with some of the most powerful fighters around in an effort to reunite his family!

As far as the story goes for ‘Tom Yum Goong’, it’s highly likely that main premise will be chastised by a Western audience.  This is not to say that it is offensive or even all that memorable, but the core concept does centre around the spiritual significance of elephants. Without this connection, the very basic “man searches for missing elephant” is admittedly somewhat laughable and it certainly seems like a ludicrous backdrop for a modern action movie. However, it is this distinctly Thai flavour and the film’s simple approach that actually makes ‘Tom Yum Goong’ so appealing. You always feel like there’s no fuss involved, and this is just an old fashioned fight flick that has our hero save the day and beat up all the bad guys.

‘Tom Yum Goong’ doesn’t exactly offer anything to get excited about in the acting department. The main bright spot remains Tony Jaa, who definitely makes for a solid heroic presence as he displays all of the right mannerisms and poses when required. Sadly though, he is also saddled with the brutally unfunny Petchtai Wongkamlao who puts in another typically annoying performance. To make matters worse, he spends the majority of the film speaking in broken English which means that he is not only irritating but also fairly difficult to understand.  It also has to be said that some of the Western actors are truly atrocious, particularly the inept Police officers. Their line delivery is extremely wooden and you start to wonder whether the casting directors just waited outside the ‘Neighbours’ set to pick up any cast offs.

Of course, I’m sure that all of the above is irrelevant to most as the real draw of ‘Tom Yum Goong’ is undoubtedly the action. Thankfully, on this account it definitely delivers and Tony Jaa is once again absolutely outstanding. His displays of physical dexterity and stuntwork are brilliant, and he really makes the fights feel invigorating and exhausting to watch.  Rittikrai’s choreography is also very refreshing as he provides some very inventive sequences that certainly make use of the setting and Jaa’s obvious strengths. Perhaps the best example of this is one particular sequence that sees Jaa fighting a group of bad guys as he ascends several flights of stairs. Rather than just shooting this with numerous edits though, ‘Tom Yum Goong’ shoots it in a single take which really makes you feel like you’re right there in the thick of it. However, this type of quality action does come at a price as even though it is amazing to watch, one can’t help but feel that a lot of the sequences are centred around showcasing Jaa’s obvious talents. This makes a lot of the action feel somewhat staged and there are moments where the whole thing just starts to feel like a fighter’s extended showreel.

While the story is certainly very simple and some of the acting does leave a lot to be desired, ‘Tom Yum Goong’ still succeeds in being a very entertaining action movie. Some of the fight scenes are truly out of this world and I’m sure that fans of ‘Ong Bak’ will find plenty to appreciate here.