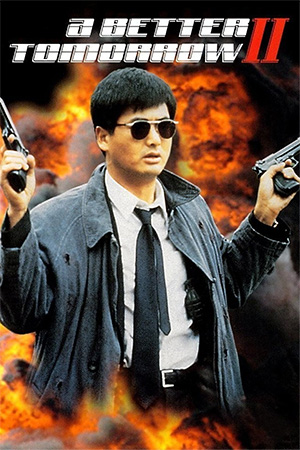 It’s years after the teaming of Mark (Yun Fat), Ho (Ti Lung) and Kit (Leslie Cheung) ; Ho is still in prison and Kit is a prominent figure on the force.  Unbeknownst to Kit, Ho is approached by the police to investigate a good friend of his by the name of Lung (Dean Shek), and is released to perform this task.  In a deal gone wrong, Lung is framed for murder and must flee to the U.S.A. to escape the authorities.  Whilst he is away, his daughter is murdered causing Lung to go temporarily insane with grief.  Mark’s twin brother Ken (an excuse to bring CYF back) is running a restaurant in the states and goes to his aid.  He helps Lung regain control of his life and the two return to Hong Kong to team up with Ho and Kit to take revenge for his loss.

Devising a sequel for a classic film like ‘A Better Tomorrow’ is no easy task.  It was for that very reason that John Woo was reluctant to make this follow-up, especially considering that the first film had such a fitting conclusion.  However, despite lacking the heart of the first film and possessing a slightly incoherent plot, ‘A Better Tomorrow II’ is probably the best you could have hoped for. The film sports some fine performances from Ti Lung and Leslie Cheung, as well as some interesting character developments that help to flesh out some other parts of the story.  Chow Yun-Fat also pulls off one of his most charismatic roles to date, somehow managing to retain his cool persona whilst also feeling like a different character to the role he portrayed in the original.

What this film lacks in plot, it sure as hell makes up for in action and the finale of ‘A Better Tomorrow II’ is a brutal display of guns, grenades and swordplay.  Woo’s usual style of balletic gunplay is on show to the max here and doesn’t disappoint.  Well worth seeing for the action alone but make sure you see the first film to get a vague understanding of the story.