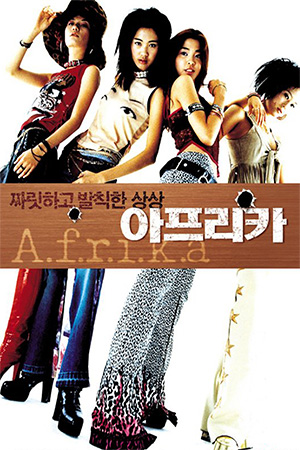 College student Ji-Won (Lee Yo-Won) has hit the skids in her life; her mother has written of a new partner, and her own boyfriend has just dumped her for someone younger. Her best friend, So-Hyun (Kim Gyu-Ri), also finds herself floundering as her dreams of becoming an actress have been crushed through a string of failed auditions. Thereby the two decide to hit the road for the weekend and let their hair down, with So-Hyun’s boyfriend, Young-Bae (Kim Ji-Wan), supplying them a car on loan from his uncle. Unbeknownst to the girls the vehicle doesn’t belong to Young-Bae’s uncle but has, in fact, been purloined from a local gangster. To make matters worse, the backseat harbours a pair of concealed handguns owned by a detective and gangster that had been forfeited in a card game.

While the girls conclude that the guns might come in useful, their owners, Detective Kim (Sung Ji-Ru) and his gang buddy Nalchi (Lee Je-Rak), have their sights set on their safe return lest additional trouble erupt for either. Along their way, the girls pick up coffee-shop waitress Young-Mi (Jo Eun-Ji) whose discovery of the weapons sparks a robbery spree. The next thing the trio knows they’re not only being chased by some very peeved firearm owners, but they’ve also become a media sensation across Korea. Recognised by fashion store clerk Jin-Ah (Lee Young-Jin), the trio becomes a quartet and it’s not long before their exploits have inspired an internet fan club as well. With the whole country after them, making it home to Seoul begins to look less like a chaotic road-trip than a complete impossibility.

Much as with any filmmaking region in the world, South Korea harbours a strong commercial output that provides the backbone of their industry, whilst arthouse and independent productions operate on a smaller scale alongside its bread and butter mainstream (often to awards and critical acclaim on the international festival circuits). At the advent of the New Millennium it was arguably some of the nation’s bigger box-office successes, such as ‘Attack the Gas Station!’ (1999), ‘My Sassy Girl’ (2001) and ‘My Wife is a Gangster’ (2001), that made inroads into English-language territories and loudly heralded that there was a new Asian filmmaking force in town. Once the stage was set, and international audiences warmed to an exotic new flavour, it wasn’t long before the clamour for successive features started drawing in second-tier commercial ventures of the ilk of Shin Seung-Soo’s ‘A.f.r.i.k.a’ (2001) to capitalise on the newfound (global) interest in Korean cinema. Of course, Shin’s swansong directorial effort is what Western filmgoers would label a “teen-comedy” (albeit one with additional healthy doses of road movie, underworld comedy and knowing film parody), but don’t let that put you off as it’s most certainly one that’s both self-aware and terribly funny when it (often) hits its marks.

Lifting its source material from an original play by Ha Sung-Ran, ‘A.f.r.i.k.a’ proves something of an anomaly being that its eponymous quartet of girls amok (the title referring to their internet fan club, Adoring Four Revolutionary Idols Korea Association) aren’t especially all that memorable, once the road-trip has played out and the story has wrapped. Primary leads, Lee Yo-Won (‘The Recipe’, 2009) and Kim Gyu-Ri (‘Portrait of a Beauty’, 2008), as the best friends undertaking what they think is a harmless road-trip display characters that contrast like chalk and cheese. Lee is the dour, chain-smoking and ever cranky Ji-Won whereas Kim brings some radiance to the pair with the bubbly, though not too bright, So-Hyun whose weepy admission, once their combined situation takes a turn for the uncertain, that she “misses her Mum” is as clichéd as it is inevitable. Once they add Jo Eun-Ji’s (‘Forever the Moment’, 2007) loose cannon Young-Mi to the mix proceedings perk up immeasurably and the mad-cap adventure begins to take on a life of its own. Therefore, it’s a bit of a shame that the addition of ex-con Lee Young-Jin (‘Yoga’, 2009), who fantasises of nothing but revenge against her corporate embezzler ex-boyfriend, brings things back to earth by balancing out the quartet with an even split of airheads and sourpusses.

Thankfully, veteran comedy director Shin (of ‘My Old Sweetheart’, 1995 and ‘Hallelujah’, 1997 fame) holds an ace up his sleeve in the casting of the girls’ pursuers with the unlikely pairing of veteran character actor Sung Ji-Ru (‘Marrying the Mafia’, 2002) and Lee Je-Rak (‘Real Fiction’, 2000) as Detective Kim and Nalchi, respectively. The moment the two appear onscreen together, the audience knows they’re in for some hearty laughs and some amazing fireworks as the pair play off each other; Sung the irrepressible and volatile clown, and Lee the cool, calm and intellectual gangster who effectively becomes the surrogate detective the further into the narrative we travel. To be honest, every frame of screen-time that Lee (along with his right-hand man, Oh-Bong) is afforded the more he manages to steal the entire film out from under both the leads and his co-star. Lee’s character is so engaging and entertaining that one almost wishes he had’ve been granted a spin-off feature of his own. His soft-spoken, deadpan delivery of his lines generates some agreeably generous hilarity throughout, with the off-handed remark to his cohort, “He’s lost his shit”, while Sung literally implodes in a tantrum of rage proving especially memorable. It’s hard not to come away from ‘A.f.r.i.k.a’ without having been won over by Lee and his character.

Admittedly, the film periodically side-tracks into subplots that only manage to hinder the story’s momentum, such as the girls happening upon a small group of gangsters (or Kkangpae, to use the Korean term) hiding out in a forest camp or the aforementioned back-story for Lee Young-Jin’s character, but Shin never allows things to meander too long before he’s either brought us back on track or interjected another round of amusing intervention from Sung and Lee. There’s the expected histrionics and blubbering from the girls during crucial points in their journey, which does tend to irritate somewhat once you know what’s coming but there’s also some smart social satire as well as cinematic parody to counter those familiar outbursts. Once the girls start attracting a folk-hero following amongst the nation’s youth (most notably with the internet fan club), the police and media are quick to paint them as North Korean spies out to create civil unrest in the South and there’s a handful of deliberate digs at other popular cinema of the period. Best of these is the sequence where the girls hold up a service station, which turns out to be run by Park Jung-Woo of ‘Attack the Gas Station!’ (1999) but ‘Kick the Moon’ (2001) and ‘My Wife is a Gangster’ (2001) also get name-checked in throwaway fashion, just as light-hearted nods towards Shin’s predecessors.

Obviously, teen comedies (and in turn, teen-oriented comedies) aren’t the genre for everyone, and a South Korean appropriation of the formula perhaps even less so. But even though it isn’t as high-profile as some of the other commercial hits of the era that made their way West to international viewers, ‘A.f.r.i.k.a’ still manages to hold its own against many of its better-known peers. Director Shin manages to find a balance between the oft-exaggerated exploits of his girls on the run and the manic energy and slapstick violence exhibited by their odd couple (trio) opposites. Melodrama and waterworks expectantly bog down proceedings quite considerably when they raise their ugly heads, but at the end of the day the package is a bit of harmless fun and, like its Western counterparts, not intended to tax the brain or invoke Goddard. Throw in some glossy pop-video pastel cinematography and a soundtrack that’s an eclectic blend of K-Pop, hip-hop and Nu-metal and you have some aggressively lightweight, yet infrequently raucously funny, entertainment. ‘A.f.r.i.k.a’ isn’t rocket science, but if you like a good laugh and are conversant in the basics of Korean pop-culture and society, it should prove an enjoyable treat, nonetheless.