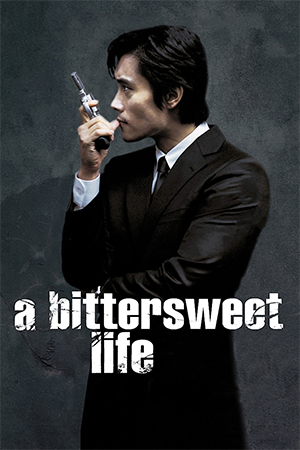 Full on gangster drama from one of Korea’s brightest stars, Kim Jee-Woon, ‘A Bittersweet Life’ literally crackles with invention and tension. Woon seems to get better and better with each flick and it’s interesting to see him take on the gangster genre after the morbid comedy of ‘The Quiet Family’ and the nerve racking horror of ‘A Tale of Two Sisters’. ‘A Bittersweet Life’ rarely puts a foot wrong (at least in these reviewers’ eyes) as it tells the admittedly simple story of a mob enforcer taking violent retribution on those who have done him wrong. However, character complexity and emotional payoff are never skimped on and there is also a healthy helping of hard hitting action.

Lee Byung-Hun is Sunwoo, a resourceful and intimidating “hotel manager” for mob boss Mr Kang (Kim Young-Chul), sorting out any “problems” for the gangster when needed. Skilled to the extreme in taking care of himself and his employer’s problems, Sunwoo has honed himself to perfection and is loyal to the end. When asked to keep an eye on Kang’s new young girlfriend while he is away, Sunwoo soon finds emotion stirring within himself, falling for his boss’ mistress Hee-soo (Shin Min-A). However, she is in love with a different man and, after some emotional struggle, Sunwoo decides to give Hee-soo and her new lover a chance and to help them get away from Kang. But as is always the case, Kang has eyes and ears everywhere and discovers Sunwoo’s deception. Hunted down, Sunwoo is tortured, tested and given a chance to prove his worth to Kang and make up for his mistake. Yet Sunwoo has other plans: plans that involve killing pretty much everyone who has turned against him.

For a change, style and substance merge perfectly, the cool, crisp look never over shadowing the tumultuous events the characters are put through. Lee Byung-Hun brings an understated intensity to his character, able to defend his life at one moment and then lost for words when presented with a beautiful woman the next. His Sunwoo character is the picture’s heart, a man once turned cold now warming up to life again. Never cocky but confident, never showy but capable of getting “the job” done, Sunwoo brings an emotional core to the film and to the type of character that rarely gets the chance to be human. Kim Jee-Woon is the other star, keeping an assured hand all the while, expertly switching from scenes of quiet intensity to ones of ferocious violence. The flick never loses its gritty edge no matter how crisp the visuals become, Sunwoo’s journey keeping momentum pulsing as we eagerly await what he is going to do next.

Woon also stages some impressive battles as Sunwoo takes on various groups and gangs. An extremely tense set piece that involves being buried alive, a phone battery to the eye and an escape by using a piece of wood on fire, is staged with such verve and convincing realism you begin to wonder if Sunwoo will actually make it out alive. Same goes for the epic gun battle come the finale, the best set piece since John Woo quit making eastern films. Violence is often brutal and in your face but, along with action, spaced out and always important to the narrative.

There is so much to say about ‘A Bittersweet Life’ but the best thing to do is to just see it. Ignore anyone that complains the story is too simple as that is part of the charm and why the film works so well. It will probably be unfairly overshadowed by the likes of ‘Oldboy’ and misleadingly compared to the likes of Scorsese, Leone and such likes. No offence to that great film or those great directors, it’s just that ‘A Bittersweet Life’ is just as good if not better and ultimately a beast all of its own. A true gangster epic with brilliant performances, direction and action and not a mockney geezer or wideboy in sight. Simply: great.