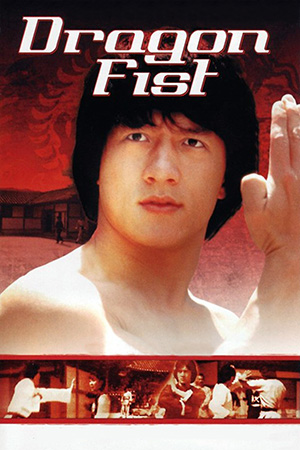 It’s widely said in Hong Kong film circles that director Lo Wei did little more than point a camera at action and let it roll. Whether this rather harsh criticism is justified or not is unimportant as Lo Wei has still managed to produce a few genuine genre hits. ‘Dragon Fist’ is one of the less recognised, yet strongest kung fu films of both Lo Wei’s and Jackie Chan’s careers.

Jackie stars as a young fighter who watches in horror as his master is soundly beaten by a callous fighter who throws down a challenge. Eventually the wounds lead to the master’s untimely death and the school is destroyed as a result. Jackie therefore trains until his skills are good enough to combat the killer’s and, alongside his late mentor’s wife and daughter, travels across China in search of revenge. What seems a straight-forward mission for him proves to be anything but though as the killer has since crippled himself after his wife’s related suicide. The avenger is therefore trapped in a situation where he cannot take revenge without appearing to be a coward. Another blow comes when his late master’s wife falls ill with a mysterious ailment and the only cure is owned by a ruthless local school. Deciding to aid them in return for the valuable medicine, he once again finds himself in a very tension-filled situation that inevitably leads to bloodshed.

‘Dragon Fist’ takes a ragged plot and twists it into something refreshingly different. The typical revenge device suddenly gets turned into a far more mature character study after the half-hour mark and then proceeds to introduce a far more sinister enemy for the principal leads to deal with. Credit should certainly go to Lo Wei for creating a production that doesn’t just throw action at its audience, but lets them understand the well fleshed-out characters more than usual. Wei is not one of Hong Kong’s greatest directors, but his part in making an excellent kung-fu film like this should be appreciated. Jackie Chan is given one of his more serious roles and succeeds in giving a fine performance both in the acting and the fighting departments. Some Chan fans will be disappointed by the lack of comedy, but the open-minded viewer will be rewarded by a hidden gem of his early career. Significantly, the action is also very well performed and choreographed with a stand-out finale that features some powerful action. ‘Dragon Fist’ is well worth watching and it remains another solid production from the Lo Wei years.