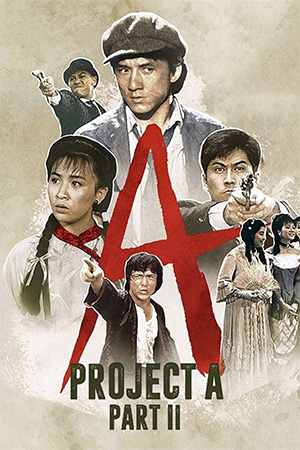 ‘Project A Part II’ sees the return of Jackie Chan in the role of Dragon Ma.  This time he is assigned to investigate a corrupt police officer (Lam) who is clearly in league with the local underworld. Ma bravely brings one such crime boss, Awesome Wolf (Chan Hui Man), to justice to prove that a new regime is needed in the town. Lam therefore decides to be rid of Ma once and for all. With the help of a trio of the Empress Dowager’s agents and a number of misguided revolutionaries, Lam’s plan is put into effect. With the realisation that Ma is one of the few good men left in the town, the revolutionaries save his life and then start the chain of events leading up to the incredible finale.

It was impossible to match the original classic, but Chan pulled out all of the stops to make sure he gave it his best. The result is a masterful piece of film-making with all the energy and excitement that Chan’s following demands. Although lacking Sammo and Yuen, the film still features numerous classic moments, particularly the heart-stopping twenty minute finale. Coupled with the seamless direction, ‘Project A Part II’ is another must-see film from the master.