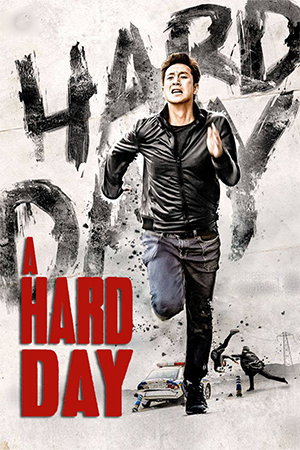 Corrupt officer Gun-Soo (Lee Sun-Kyun) is driving through a stormy Seoul having just been given divorce papers from his estranged wife and the news that his mother has died. Things get considerably worse when, momentarily distracted, he knocks down a pedestrian, seemingly killing him through the negligence. Gun-Soo is caught in two minds as to what to do, but with traffic police in the area hearing a disturbance and gradually approaching, the officer panics and puts the body in his boot. Although he escapes notice and finds an ingenious way of hiding the corpse, a mysterious phone call tells him that the accident and its aftermath were witnessed which leads to a game of cat-and-mouse between blackmailer and ‘victim’.

‘A Hard Day’ is an appropriate title for this darkest of black comedies with the anti-hero lead going through the kind of ordeal that would leave lesser persons a nervous wreck. Of course the first significant victory for Kim Sung-Hoon’s minor masterpiece is to turn a corrupt, cowardly character into someone to root for. At first this isn’t easy, but the brilliance of the film is the way the plot unfolds in such a way that Gun-Soo is turned into the victim by the actions of the obsessive blackmailer.

The skill of creating a film that is witty, absurd, thrilling and even poignant is not to be underestimated. Similar productions could pat themselves on the back for successfully weaving in one of this virtues, but ‘A Hard Day’ seamlessly knits these elements together. That great Asian tradition of changing the mood within just a few seconds is ably demonstrated by a writer/director who balances the responsibilities of his roles supremely; many other offerings have tried and failed this difficult juxtaposition.

‘A Hard Day’ is peppered with moments of sophisticated dry humour that are perfect for the narrative. Recalling the tone of ‘Villain and Widow’, this is that wonderful achievement of a film that is genuinely surprising, fresh and entertaining throughout its running time. So many Korean productions seem to be under the misapprehension that the duration of the story needs to be over two hours due to some archaic local law – often, of course, when the material is barely interesting for 90 minutes let alone a half an hour more. ‘A Hard Day’ skips through its running time with such confidence that it sweeps the viewer up in its riptide. Some sub-plots are dangled throughout and do not get the conclusions they deserve, yet this is still a crackerjack Korean comedy that features a wonderful double act by Lee Sun-Kyun and Cho Jin-Woong as the oddball antagonists. ‘A Hard Day’, but a great watch.