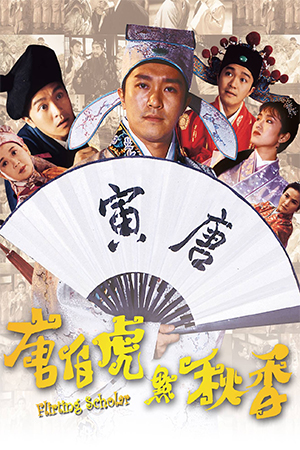 Tong Pak Fu (Chow) is the leading scholar of the infamous “Four Scholars” and excels at poetry, painting, music and … well, just about everything really.  Despite having eight wives, he still remains unhappy as they persist in spending their time at the Mahjong tables.  Thankfully, his life changes for the better when he catches sight of the beautiful Chow Heung (Gong Li) who has a smile that makes him realise she is the one true girl for him.  Heung is a servant of a household that hates the work of Tong Pak Fu so he must enter disguised as a servant. Trouble begins when the “Four Perverted Heroes” decide to take Chow Heung for themselves and an old enemy of Pak Fu’s father is hired to kill the family.

From reading the synopsis, many may consider ‘Flirting Scholar’ to be a little too home-grown to appeal to international audiences. However, I’d actually go so far as to say that this film is one of Chow’s most easily accessible and highly amusing comedic adventures.  It’s true that it is based on a classic Chinese tale and contains a lot of Chow’s notorious ‘fast speak’ (which just does not translate well), but it is littered with enough trademark slapstick routines, well choreographed kung fu fights and easy-to-spot spoofs, that it can appeal to just about anyone.  Trust me, if you don’t smile at least once then you must have had a humour bypass.

All of the performances from the cast are also first rate, particularly from Chow himself. Admittedly it isn’t the biggest stretch of his abilities but he always manages to win you over with his loveable scamp persona. The romance between Chow and Gong Li is also extremely heartwarming, allowing you to overlook the fact that Li’s character is perhaps a little on the lightweight side.  Ng Man Tat’s regular understudy Natalis Chan is also called into action and it has to be said that he is at times so amusing that Man Tat will have to keep one eye over his shoulder.

A love story, comedy and action film all rolled into one, ‘Flirting Scholar’ is top entertainment for experienced HK movie connoisseurs or newcomers alike.