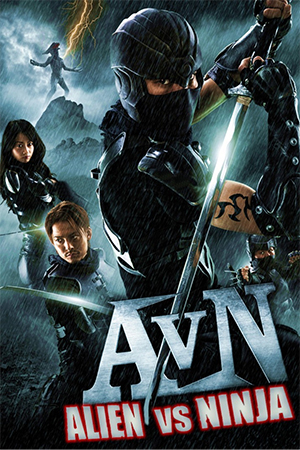 After finishing up a routine recon mission, a group of Iga ninja are heading home when they spot a fiery mass that lands deep in the forest. Their master tells them to investigate the incident so they make their way towards the crash site. When they arrive they are ambushed by a group of horrifyingly savage creatures and their numbers are reduced to the bare minimum. Ninjas aren’t ones to take this kind of behaviour lying down though, so now it’s a true battle royal as both sets of combatants give their all in the fight for survival.

Oh Seiji Chiba, you clever bastard. Putting aliens AND ninjas into the one movie, that is truly a stroke of genius! Of course, it is also a combination that comes with some fairly weighty expectations. Thankfully, ‘Alien Vs. Ninja’ is the kind of laughably cheesy romp that you would have hoped for. Essentially it plays out like a lightweight remake of ‘Predator’, with a group of super soldiers (in this case ninjas rather than marines) stuck in a remote location fighting off an alien invader/s. Admittedly it is a bit of a slow starter and none of the characters have the presence of an Arnie, but the general tongue-in-cheek approach and silly amounts of gore certainly make it work. The only downside is that we also have to suffer through the so-called comedy stylings of Donpei Tsuchihira.

On the action side, ‘Alien Vs. Ninja’ sports some decently choreographed fight scenes that add another level to its charm. Most of them certainly have more than a hint of humour, whether intentional or unintentional, but they are still well put together and fast paced enough to make the combat enjoyable. The effects are also surprisingly good considering the budget, with some fine looking chopped-up body parts and flashes of CGI that are more convincing than you would expect. The alien design itself clearly owes more than a little to the ‘Alien’ movies, even going so far as to rip-off some of their abilities, but in this case it is always obvious that it’s a man in a rubber costume. It’s fine though because it still serves its purpose and the fakery just adds to the overall hilarity.

For a change, ‘Alien Vs. Ninja’ is an amusingly titled, low budget action movie that actually lives up to expectations. Sure, it’s cheap and cheesy but it knows how to have fun with the subject matter and never takes itself too seriously. Good on you Seiji Chiba.