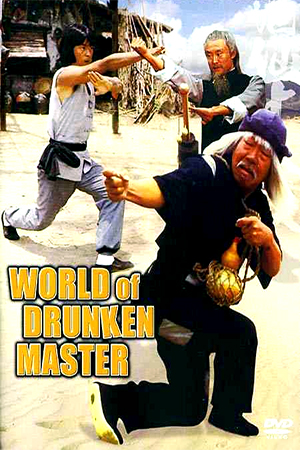 Another kung fu comedy inspired by the hugely influential ‘Drunken Master’ and another lacklustre attempt to create the same cinematic spark that the Jackie Chan hit had. Once again, elements are ‘borrowed’ from the original box-office smash, but this time there is a very short cameo by Yuen Siu Tien to further the link.

Wandering Beggar So (Li Yi Min) is invited to a mysterious meeting at an abandoned restaurant and decides to venture there out of interest. When he arrives, he meets former friend Tai Pei (Jack Long) who has also been invited there by the stranger. After an initial period of hostility, So and Tai Pei begin to remember their first meeting many years ago and how they became friends. Their story begins with in their youth with both being mischievous orphans keen to take every opportunity to make easy money. Tai Pei initially meets So when the two are intending to steal grapes from the same vineyard and the pair decide that their combined efforts would be even better for the task. However, during the theft, the pair are caught by the vineyard owner who decides to put them to work so that they can pay off their debt. After a while, the owner begins to take pity on the two and teaches them Drunken Boxing following their pleas. Tai Pei and So quickly become proficient in the style and are more than happy to try out their skills on the local thugs. Their actions bring them to the attention of the town’s main villain who also happens to have a score to settle with the vineyard owner. When he discovers his adversary’s new location, he gathers together his gang and marches to the vineyard for revenge. Thankfully, So and Tai Pei are not far behind and are ready to save their master’s life. After such an encounter, the two are later divided over their love for the same woman and are now in their present state. However, the reason for their invitation is soon explained as the mystery man arrives to explain everything.

Joseph Kuo can be credited with providing the genre with much to savour, but ‘World Of Drunken Master’ is a very routine kung fu comedy. Kuo tries to add an extra dimension to the storyline by telling it in flashback and adding a brief romantic sub-plot. However, as admirable as these attempts are, the film is too derivative to make use of these properly and we are instead left with a very familiar production. As usual, Kuo has gathered together a solid cast though and Li Yi Min and Jack Long make two very capable leads. They do shine in the numerous scenes of fight action but, even with Yuen Cheung Yan choreographing, there’s nothing too spectacular within them. Those who don’t mind another ‘Drunken Master’ rip-off may still find this a worthwhile purchase, though it’s hardly a prime example of the sub-genre.