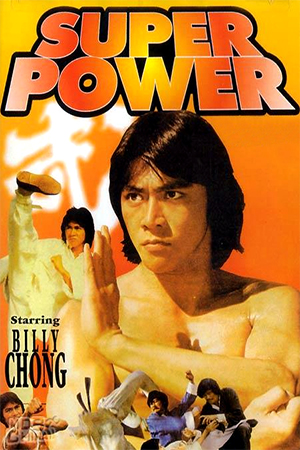 One-time Indonesian martial arts star Billy Chong (aka Will Dozan) kicks some serious butt in this very early 80s kung fu fest. Very much in the ‘Snake in the Eagle’s Shadow’ and ‘Drunken Master’ mould, ‘Super Power’ sees Billy Chong defending the honour and life of his father who is next on the hit list of the Horse Fist Clan. They’ve been commanded by their dying leader to get revenge on the kung fu masters who shamed him many years ago. Billy’s father is next in line and, after some comedy hi-jinks, he must hone and improve his ability in Nature Fist Style if he is to stop the clan and defeat their deadly Horse Fist Style.

While it’s about as textbook as late 70s early 80s kung fu flicks can get, ‘Super Power’ is a slick fight action flick. The plot is nicely set up in predictable revenge style fashion as the Horse Fist Clan goes about making trouble, killing martial arts masters. This all leads to Billy Chong who, if he can stop mucking around, showing off his kung fu skills and hitting on the town cutie, must train hard in order to beat the three tops dogs of the Horse Fist Clan. So far, so standard. I mean we even get the fat comedy sidekick, predictably, called ‘Fatty’ and the bushy grey haired aged kung fu master. ‘Super Power’ couldn’t be more old school kung fu action if had a surfeit of awesome training and fight scenes.

Which it does: in abundance. In fact ‘Super Power’ is really just a showcase for Billy Chong’s impressive fight skills. And impressive they are. Near as good as any of the kung fu legends of the time, Chong displays remarkable technique and bootwork in literally scene after scene of fight action. This all ends in an awesome fight climax that sees Chong take on the three head honchos of the Horse Fist Clan, one after the other. It’s like he’s levelling up each time he beats one of them as the fights become tougher and tougher. On top of this, Chong also takes part in some incredible training scenes. In fact, due to their intensity the training scenes are arguably even better than the fight scenes as they show a fighter at the peak of his physicality.

While it isn’t anything special in terms of kung fu originality, ‘Super Power’ is a perfectly decent Billy Chong vehicle. He may not have reached the heights of the Chan’s, Hung’s and Li’s of the martial arts entertainment world but the guy could sure cut some moves in the fight scene department.