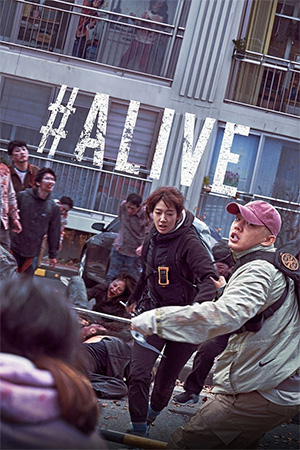 The world over the zombie genre trundles on either recycling old tropes or finding new ways to re-invent the wheel (even if only a little!) and South Korea’s ‘#Alive’ (no doubt greenlit after the enormous global success of ‘Train to Busan’) is the latest new fresh offering. Ok, so it’s not completely fresh as it owes a bit to France’s ‘The Night Eats the World’ and the whole trapped in apartment block with the undead has been done before (‘Rec’, ‘Rammbock’). But the freshness comes from the energy the film features and the brilliant performances from the two leads.

Said person trapped-in-an-apartment-block is young gamer Joon-woo (Yoo Ah-In) who wakes up one morning to find his family have gone out and the world outside is rapidly being overrun by an infection turning its citizens into the walking hungry undead. Trapped inside his apartment and low on supplies (he should have gone to buy groceries when his mum told him to!!), Joon-woo at first thinks he must just wait it all out until being rescued. But when this doesn’t happen and he fears his family have succumbed to the infection, he begins to panic with the realization of being all alone taking its toll. Just when he reaches rock bottom, hope glimmers when he realises, he is not all alone after all as there is another survivor in the block across from him (Park Shin-Hye). Through some ingenuity and sheer will power the two find a way to communicate and hatch a plan to survive.

Slick, inventive and downright tense on occasion, ‘#Alive’ (despite the silly title!) is fast moving zombie fun. Buoyed by two incredible performances from the young leads (they both traverse terror, hopelessness, frustration and badass-ness with aplomb) the film offers a fun take on two youngsters in the digital age using their grasp of tech to help them survive. Drones, smart phones, tablets and social media all play their part but so do more low-tech methods (which Joon-woo has to get his head around!) as when the power goes, the two have to resort to more primitive methods. The zombie action is mounted well, fast and full of fury and the makers use the apartment block environment creatively to fashion the increasing danger the two face.

While fast and fun for the most part there are a few inconsistences, which keeps ‘#Alive’ from being great rather than just good. Such as, while the power is out the lead’s phones always seemed to be charged, zombies who open doors in one scene are then thwarted by them in another and there’s a fair few moments of convenience that occur randomly, presumably to just drive the plot forward. However, these don’t ruin the overall fun (it’s a zombie movie, inconstancies are allowed!) and if you’re a fan of the zombie genre then ‘#Alive’ is certainly recommended.