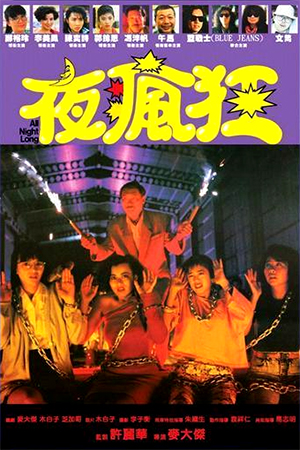 Peter Mak’s ‘All Night Long’ is a film that reminds us why 80s Hong Kong cinema was seen as a ‘Golden Age’. Naturally, with the sheer amount of films produced there were a sizeable chunk that were mundane or derivative, yet that majestic era saw a plethora of creative classics as well as some minor greats hidden among the multitudinous releases. The excellent comedy thriller ‘All Night Long’ is an ensemble work that deserves its label as one of the said minor greats.

Primary school teacher Wang (Cheng) leads a solitary life where evenings drag by and her loneliness is constantly on her mind. Working back from work on night, Wang manages to evade potential attack by a gang of violent youths when she jumps into the car of a stranger and begs for his help. Out of the frying pan into the fire though as the driver seems especially eager to evade the various police roadblocks lining the streets and eventually ends up at a remote 8-12 supermarket. The sinister driver pulls a gun on the terrified Wang and tells her to smuggle him into the shop where he can make a call to a ‘Mr. Big’. Once in there he reveals a fatal wound that was sustained during a bloody robbery and contacts his cohorts to collect the ill-gotten gains before he expires. An ensuing fight with Wang and three other women at the store leaves the assailant dead and the money in his possession now acts as a major temptation to the quartet. While they try to decide the best course of action, they have to hide the body from the friendly police officer who frequents the area (Wu Ma) and squabble endlessly about who was really to blame for this incident. But ‘Mr. Big’ is on his way to the store and, with his three unhinged associats, resolves to get back what they see as their’s.

Starting off as a partial homage to Scorcese’s superb ‘After Hours’ and subsequently nodding in the direction of Tsui Hark’s peerless female-driven ensemble hit ‘Peking Opera Blues’, ‘All Night Long’ is a captivating hybrid of thrills and laughs. Any film that can throw Carol Cheng into such an intriguing concept is well worthy of recommendation and here she is slickly supported by Elizabeth Lee, Elsie Chan and most notable the delightful Crystal Kwok. All four actresses come to life through the lengthy, though always compelling dialogue scenes they share and the generous screen time they afforded together by Peter Mak.

Taking part in a surreal, twilight Hong Kong where everything seems unfamiliar and off-kilter, ‘All Night Long’ is striking from its first few frames right through to its bittersweet finale. The director spends little time setting up the narrative, choosing to throw his heroine into the action from the first few minutes onwards. Yet it’s the subtle atmosphere that one absorbs by osmosis that keeps Mak’s intentions clear and its effects add to an already fascinating film. It also maintains its momentum through 90 minutes despite starting its central storyline with little exposition; so many works of this era tend to ruin intriguing starts with an eventual collapse of imagination and needless fillers. ‘All Night Long’ is a vehicle for four fine actresses and a film-maker who may not have made a significant contribution to Asian cinema, yet shows with this production that his skills are worthy of merit.