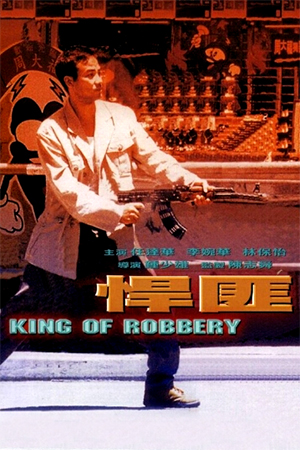 After escaping from a mental asylum, Boss Sing (Yam) teams up with his former gang to go on a major crime spree. The only obstacle comes in the form of the local police, but they are quickly dealt with thanks to some sparkly new AK-47s.  Several killings later and Sing has now become the top of the most wanted list with a one million dollar price tag on his head.  However, the gang is starting to ask questions as Sing seems to be more preoccupied with pursuing a local woman. As the cops start to close in, will the gang be able to escape with their blood-stained earnings or will they be torn apart by the bickering from within?

Despite featuring a promising cast, ‘King Of Robbery’ is a struggle right from the start. The opening thirty minutes appear to be made up of little more than a single cameraman following the gang around as they rob one store after another. After this initial “excitement” eventually dies down, a police officer is introduced to try and create an antagonist for Simon Yam’s character. Sadly though, we know and care so little about our so called anti-heroes that you really struggle to worry about the fact that they are being pursued.  Various camera techniques are also utilised to try and ‘beef up’ the content, such as freeze frames and ridiculously blurred replays of the action, but all this seems to do is make the production look even more amateur than it actually is.

The only minor pluses for ‘King Of Robbery’ come from the assembled cast and crew. Even though he has very little to work with, Simon Yam still manages to impress with his portrayal of yet another mean and moody criminal mastermind. Roy Cheung is also on fine form and he makes for a suitably intimidating Triad henchman with a lust for power.  Similarly, action choreographer Chin Ka-Lok tries his best with the shoot-outs and they are probably the most watchable elements of the whole movie.

‘The King Of Robbery’ contains a few valid attempts at acting, some nice shots of Hong Kong and a couple of average action scenes. Sadly though, it’s simply not enough to overlook the complete disregard for plot and characterisation so this movie definitely gets a thumbs down from me.