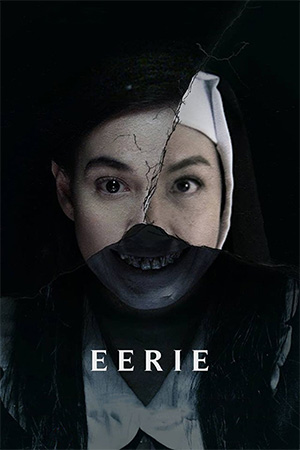 Low-key chiller, ‘Eerie’ may adhere to cliché and an over-reliance on jump scares but thanks to an effective sense of dread conjures up a worthwhile watch in the long-haired-scary-ghost-girl genre. The setting also helps to create an air of atmosphere, as the action takes place in an all-girl Catholic school in the mid-90s. The dark and creepy setting has a sinister history as one of the students hung herself in a bathroom stall. Believed to be haunting the campus, other students start to drop dead meaning a malevolent grudge may be on the loose. This seems to be confirmed when guidance counsellor Pat (Bea Alonzo) starts communicating with the spirits of the slain pupils who try to help her piece together what is going on. But can she discover the disturbing secret of the school and put a stop to the killing before the vengeful phantom claims the lives of the entire school.

While it hardly breaks new ground, ‘Eerie’ still tells its spooky tale well as Mikhail Red has crafted an often beautiful looking film (despite all the muted greys and blacks) and while the pace is measured, one is never far away from the next spooky set-piece. While long haired girl ghouls and abundant jump scares may be getting a little tired, the filmmakers squeeze life out of the tired genre thanks to impressively mounted tension and a near constant sense of dread. While the build up is often better than the actual reveal, ‘Eerie’ manages to maintain a sense of unease that gives its scary scenes a genuine sense of fright. Wisely, Red commits whole-heartedly to the idea of malicious ghosts (no overused ambiguity trope here!) meaning one is definitely watching a ghost story and this makes it all the more entertaining.

Horror techniques such as the aforementioned jump scares and characters-ever-so-slowly-turning-their-heads-to-reveal-something-just-out-of-frame may have reached saturation point (and it is a little baffling how the protagonist is always in a constant state of shock right up until the finale, despite witnessing a near constant barrage of supernatural shenanigans from the get go!) but Red crafts his scare scenes well. Plus, sinister looking nuns staring out of windows will always cause a spooky shiver. The director and his crew should also be applauded for going the more restrained route savouring mounting tension and suggestion over lashings of gore or CGI nonsense: the film having a similar style to ‘The Conjuring’ in the way it executes its scares.

Hardcore horror fans may be a little too jaded to appreciate much here but ‘Eerie’, with its genuine sense of threat and impressive female cast, delivers a quietly effective shocker.