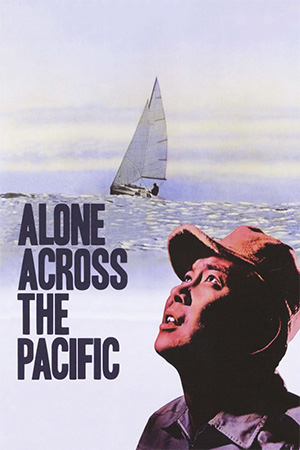 Films about man against the savage power of nature may be more familiar today – with many of the great boundaries of earth and beyond having been conquered – but when the essence of the drama is expertly conveyed, there’s still great drama to be conveyed. Available for the first time in this country thanks to ‘Eureka’s ‘Masters Of Cinema’ series, Kon Ichikawa’s 1963 hit ‘Alone Across The Pacific’ tells its true story with exceptional precision, equally absorbing to the jaded 21st century viewer.

Kenichi Horie (Ishihara) longs to leave the constraints of his homeland, planning to seek adventure by single-handedly crossing the vast expanse of the Pacific Ocean to America. His plan has to be covertly operated as the Japanese government have banned any private crafts from leaving Osaka harbour. Horie is assisted to leave the harbour under the cover of darkness and slowly, but surely begins to escape Japanese parameters. Soon, the loneliness of the voyage begins to effect the dogged adventurer and he recalls the battle he had to persuade his family to let him go. He reminds himself of the construction of his vessel, ‘The Mermaid’, and his ongoing struggle not to be pigeon-holed by the society around him. As nature’s fury begins to batter the yacht and the shores of his goal seem to be ever more distant, Horie questions his quixotic quest and even his own sanity.

Using Kenichi Horie’s actual logbooks as the source material for this oustanding film, beloved director Kon Ichikawa – along with his wife and long-time writer Natto Wada – presents a work of untold resonance. The idea of one man’s stubborn – some might say foolhardy – quest to become the first Japanese man to cross the Pacific doesn’t intially sound too absorbing, perhaps even self-indulgent. Yet this is a story that is life-affirming, exciting and pensive, the study of one man’s dogged heroism set against the vast backdrop of the earth’s greatest expanse of water. Ichikawa reminds that, ultimately, this is a work with two main characters, the endless ocean becoming a constant adversary to Kenichi Horie’s valiant attempts. This naturally means we see the beauty and the destructive power of Horie’s nemesis, from typhoons to a near-capsized vessel. All of these events are splendidly shot in glorious Eastmancolor, dappling the mise-en-scene with intense drama and gravitas while these edge-of-the-seat moments unfold.

Yujiro Ishihara was rightfully lauded for his performance as Kenichi Horie and, with a director who has shown a cogent understanding of the human condition throughout his career, brings all of the expected emotions to the role. We see Horie as the defiant hero, the quivering wreck and the adventurer desperately holding on to his sanity. The flashbacks to Horie’s planning of the voyage and his clashes with an understandably baffled family add the vital nuance that makes him such a fascinating protagonist.

If ever a film deserved its place in Eureka’s ‘Masters Of Cinema’ series, it is this unforgettable piece of cinema. Ichikawa is an auteur every bit as important to the development of Japanese film as Kurosawa, Ozu and Mizoguchi and ‘Alone Across The Pacific’s arrival on U.K. dvd shelves should hopefully cement that point. Exquisite cinematography, immense talent behind the lens as well as a superb lead performance all add up to create an inspirational masterpiece.