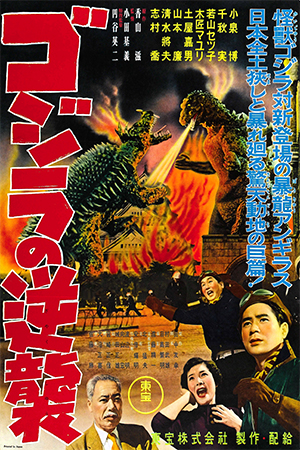 Whilst out hunting for schools of fish for a tuna cannery company in Osaka, pilots Shoichi Tsukioka and Koji Kobayashi wind up on an uninhabited strip of rocks formed by volcanic eruptions. As they are talking, the men hear strange sounds and spot two kaiju fighting, one of whom is instantly recognisable as Godzilla. Tsukioka and Kobayashi rush back to Osaka to report this information to the authorities, and find out that the other monster Godzilla was fighting is Anguirus. Godzilla and Anguirus apparently lived around the same time millions of years ago, and Anguirus was a natural enemy of Godzilla, explaining the intense rivalry between the two monsters. As their battle begins to near the shores of Osaka, the people are thrown into disarray and it is now up to the military to try and put an end to this mighty conflict.

This second outing for the East’s most notorious beast was made only four months after the original, and as such has a very similar look and tone to the first film. The story used isn’t exactly a huge departure, but it does insert just enough fresh material to feel different and makes great use of atmospheric tension and effects wizardry to allow Godzilla (or should I say Godzilla V2.0) to feel as terrifying as ever. The real bonus here though is undoubtedly the debut appearance of Anguirus, a four-legged giant dinosaur who provides stellar opposition for Godzilla as well as marking the first time in Kaiju history that two monsters went head-to-head. The only real disappointment comes from the film’s human contingent as the majority of the original cast were dropped and the exploits of the new characters often feel rather superficial in comparison to the monster mayhem.

Although they may have dated somewhat, the effects used in ‘Godzilla Raids Again’ also go a long way to making this movie such a thrill. The puppet for Godzilla is slightly altered from the first film, and although his teeth do look a little odd, he still makes for a significantly imposing figure. Likewise, Anguirus is excellently crafted and the contrast in the two creatures body structures really makes the battles seem more intense. Of course, considering the time period, there are still times when they look a little rough around the edges, particularly when they put two men in rubber suits. On the whole though, you really have to applaud Eiji Tsuburaya who definitely set the benchmark for an entire genre.

While it may not be as strong as the original, ‘Godzilla Raids Again’ is still an immensely fun ride that first showed the world exactly what would happen if two giant monsters decided to throw down. A word of warning though, the American edit (often titled ‘The Volcano Monsters’) contains a number of alterations that really spoil the film’s overall appeal.