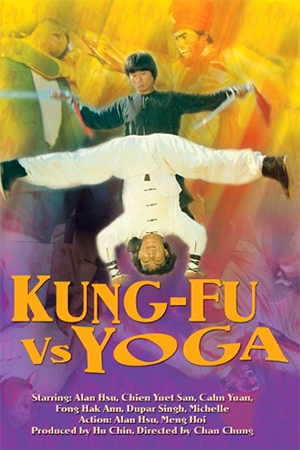 This endearing and unforgettable independent kung fu film features two familiar faces of the genre: Chien Yuet San who can often be found playing bit parts in various films of the 70’s and Alan Hsu who often took the role of villain or heroic sidekick. Both stars are not the kind of classically handsome leading men that Hong Kong produces today, but both have their own places cemented in the halls of kung fu cinema as stars and first-rate fight choreographers.

The film follows the misadventures of two friends, Gung (Chien Yuet San) and Mun (Alan Hsu), who rank themselves as happy-go-lucky kung fu obsessives. Their impulsive nature sees them enter into a kung-fu tournament in the town without knowing the prize. Mun is defeated, but Gung succeeds in winning and realises that the prize is the beautiful daughter of a local town chief. The daughter is far from willing to marry Gung and assigns him the near-impossible task of gaining three priceless items. Firstly there’s a book of Shaolin techniques guarded by a sleepy monk with superior fighting skills. Secondly is the broach of an unusual prostitute who also ranks as a tricky fighter. Thirdly Gung is asked to get a jewel from the turban of a yoga expert. With the Mun by his side to help him, Gung sets out to complete these tasks, unaware of the surprises that await him.

‘Kung Fu Vs. Yoga’ does not rank among the absolute cream of the genre, but there is definite enjoyment on offer here. The two lead stars are famously adept at the skills they perform and also prove at home with the broad comedy of the film. Action and choreography within the film are above-average and make this a watchable independent feature. However, the real stand-out of the film is the incredible Dunpar Singh who features in the final battle; you really will be astounded by his eye-popping flexibility. ‘Kung Fu Vs. Yoga’ doesn’t pretend to be high-art and instead stands as good way to pass the time.