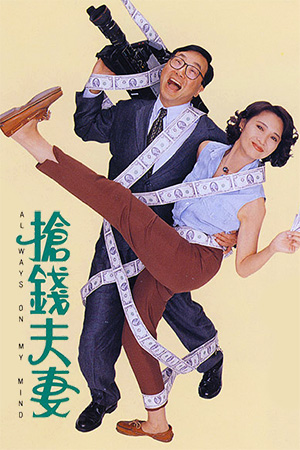 Though Michael Hui’s peerless reputation survived my viewing of the hugely dispiriting ‘Mr. Coconut’, I approached this re-release of the award-winning ‘Always On My Mind’ with due caution. Obviously Jacob Cheung is a very different film-maker to the mostly pedestrian Clifton Ko, but this often ignored though critically lauded Hui work still had the potential to be a weak link in his cinematic canon.

Money-grabbing newsreader Chang Yau Wei (Hui) leads a chaotic, yet mostly uneventful life. His devoted, ditzy wife (Siao) is always by his side while his three children have their own troubles to deal with irrespective of their father’s interest. Two shattering events shake Chang from his monotonous apathy: firstly there is the shock announcement by his eldest daughter that she wants to marry her guitar-strumming boyfriend; secondly is the discovery that he has a terminal illness which is gradually robbing him of his life. With the news still ringing in his ears, Chang breaks protocol with a very honest news report that not only upsets the police force, but also agitates his odious employer so much that the veteran anchorman is given the sack. Though he still resolves to keep his illness a secret to protect his family’s feelings, the task is made impossible when his contrite boss tries to lure him back to work after the earnest news report proves to be a ratings winner. The news station are keen to play on their star’s terminal cancer and use his last three months to send their viewing figures through the roof. While Chang agrees to this in exchange for a massive pay increase, he tells those close to him that it is all an elaborate charade and that he is perfectly healthy. As his forthright views continue to inspire the Hong Kong public and he throws himself into work so that he can provide for his loved ones when he’s gone, Chang begins to re-evaluate his relationship with his wife, his children and his craft.

The synopsis initially implies that this is little more than a reworking of the masterful satire ‘Network’, not that using such a fine production as an inspiration is necessarily wrong. Nevertheless, ‘Always On My Mind’ goes far beyond being just a pale imitation of a Hollywood classic – by the end of this thoughtful and witty satire, it is evident that this is a film that stands apart thanks to its own unique strengths. This is not only a brilliant combination of genuine pathos and dead-pan mirth, it is also one of the few Eastern satires to travel beyond its parochial roots.

Satire is a searing voice for a film to utilise, but it is also notoriously difficult to build a story around it that will not alienate a wider audience. It’s especially hard to make the humour translate while staying true to the localised targets of the satire. ‘Always On My Mind’ works so well because its targets are universal and its attacks, while not breaking any new ground or being necessarily scathing, make key points about the nature of the media. Hui’s best work has always mixed comedy with a subtle social critique, something that ‘Always On My Mind’ displays expertly. Hui’s employer – the wannabe media mogul – is a pointed combination of obsequiousness and callous manipulation; director Cheung savages the bad taste and opportunism of the media who here capitalise on the last months of their star’s life. The object of this scorn may be predictable, but that it still rings true around the world.

Just as Peter Finch’s electrifying performance ignited the screen in ‘Network’, Michael Hui revels in his leading role here. Given a chance to be much more than just a ‘funny man’, Hui is able to stretch his considerable acting talent and encompass some suitably tragic moments. Whether he is hissing at the powers that be or sharing some heart-breaking moments with those he loves, Hui gives a supreme performance. Jacob Cheung’s superlative direction also ensures that the delicate scenes never cross into mawkish sentiment and yet retain an emotional intensity under the surface. Both director and star have rarely been better than in this superior trag-comedy.

‘Always On My Mind’ starts slowly, building up a gradual understanding of its characters before the momentum increases. The best advice I would give to anyone is to stick with this excellent production through its slower moments as there is much to savour here. With the underrated Jacob Cheung behind the lens and the legendary Michael Hui in front of it, there’s little surprise that this is something very special.