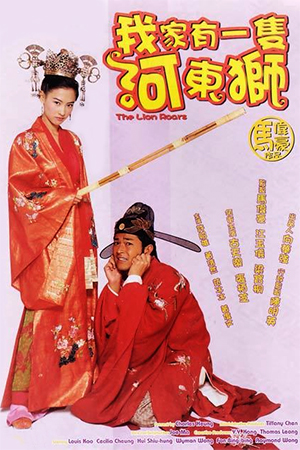 Struggling Soong dynasty poet Seasonal Chan (Koo) is eager to find a wife, but none of the potential candidates suggested by his friends have the necessary mixture of guile and beauty. That all changes after an accidental meeting with the stunningly attractive Moth Liu (Cheung) who also possesses the spirit to charm the aspiring artist. After a whirlwind romance – and at the insistence of the Emperor himself – the two marry and move into the humble residence of Seasonal Chan. It is very shortly after the honeymoon period is over that the poet discovers the reason why so few men were willing to court her: the fearsome temper she unleashes at the slightest provocation. As Chan battles with the dramatic mood-swings of his beloved, friends and family alike insist that he assert himself with the fiery Liu.

The traditional/historically based comedy is something cherished in Hong Kong even though it is a particularly parochial niche. Combining the broad farce of a Shakespearean comedy with scores of intentional anachronisms, this sub-genre relies heavily on localised humour and in-jokes. ‘The Lion Roars’ is the epitome of such a film; the winning lead couple, the lampoons of popular films and styles of the time and exaggerated comedy are all present in this frenzied 100 minutes. The resulting production then has the extra tenacity to include some heavy romantic melodrama during its emotional finale. Yet, despite filling the film with so much of this incident, it still struggles to maintain interest for the whole duration.

The initial concept behind ‘The Lion Roars’ smacks of ‘The Taming Of The Shrew’, but it only toys with the ideas behind it and resolves the conflict fairly early on. This leaves Joe Ma with a good hour or so to fill and he chooses to incorporate a myriad of sub-plots and twists. Naturally this means the consistency and mood fluctuates wildly from one scene to the next leaving the viewer in a constant state of bewilderment. Joe Ma takes a typical Hong Kong route with second half of the film, taking what was a decidedly surreal period comedy and turning it into a tear-drenched melodrama; a turn of mood so extravagant as this means that the complete film is an acquired taste.

‘The Lion Roars’ is slickly produced, well performed by its beloved leading couple and not without its moments of amusement; the idea of Soong era poets being fawned over like Cantopop stars is a watchable one and lends itself well to some of the more unusual ideas later on. Nevertheless, the film stumbles in much the same way as similar comedies do, struggling to stretch a thin concept the feature length time. To then add further sub-plots to make the narrative that bit more substantial does little to aid the overall enjoyment of this needlessly patchy work. ‘The Lion Roars’ is mostly entertaining, but ultimately forgettable.