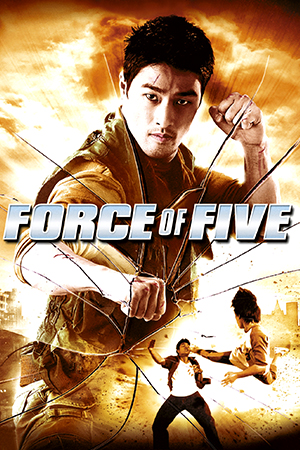 Having been raised by a Muay Thai teacher, two young brothers and their friends have defied their small stature to become talented martial artists. Sadly, the youngest brother suffers from an acute heart condition and following a minor scuffle with local bullies, he is hospitalised and left in desperate need of a heart transplant. Fortunately, a viable donor is found in another local hospital, but before it can be transferred rebel soldiers seize the building. With only four hours in which the surgery can be performed, the young friends decide to take matters into their own hands and go up against the terrorists by themselves.

From what I can tell, the basic idea behind ‘Force Of Five’ was to gather together a group of adorable children and then have the audience squeal with glee as they kick the stuffing out of bad guys. While you may think that this sounds like a half decent concept, ‘Force Of Five’ does a terrible job of fulfilling its simple expectations. Aside from the fact that the kids are fairly obnoxious, the film seems to totally forget about the action. Instead, we are forced to sit through three quarters of the movie with nothing more than unfunny pranks and remote controlled car races to entertain. Of course this might have been acceptable if this were a kids film, but the final ten minutes seem to say otherwise. After wasting the majority of the running time, the film then blatantly attempts to cash-in on the Thai kung fu craze by throwing in an ultra violent climax that is clearly unsuitable for children.

As for the little action that we do get to see, it has to be said that even this is fairly disappointing. Although the children clearly possess some genuine talent, the two that are pushed into the limelight look to be slightly uncoordinated and slow. In an effort to counter this, the movie relies heavily on slow motion… but not just for one or two moves, for every single basic punch or kick! As annoying as this may sound, it doesn’t even come close to being as annoying as the film’s use of the ‘Ong Bak’ style leaping knee/elbow. We see this move repeated over and over and over again, to the point where it loses any kind of impact and just becomes an absolute joke.

‘Force Of Five’ may have worked if it knew exactly what audience it was going for. As it stands though, it winds up being a complete mess of a movie that is neither suitable for kids nor action-packed enough for fight fans.