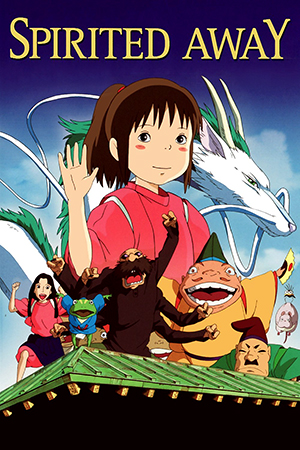 Miyazaki’s animation company, Studio Ghibli, produces animated features that eschew Disney cute in favour of realistic, whimsical stories of childhood (‘Whispers of the Heart’) or bloody, cautionary ecological fables (‘Princess Mononoke’).  Studio Ghibli’s films embrace the excitement and dread of the best fairy tales, along with the mature themes that make them so timelessly enticing.

‘Spirited Away’ continues Studio Ghibli’s triumphant, echoing ‘Cinderella’ and ‘Alice in Wonderland’ yet remaining a true original.  From the dazzlingly detailed animation design to the unusual, compelling story, this is a sumptuous treat for all ages.

Chihiro (Hiragi), a sullen ten-year old, is abruptly plunged into the fantastical parallel world of The Land of Spirits when her parents stumble into a deserted, beautiful looking town.  Ignorantly mistaking it for a theme park, Chihiro’s parents eat a banquet intended for gods and are transformed into pigs, to be fattened for another feast.

To rescue her parents Chihiro requires the help of Haku (Irino), a mysterious young boy who becomes a dragon to do the nefarious bidding of Yubaba (Natsuki), an old crone managing a bathhouse for Gods.  But, humans are unwelcome in this world of wonder and peril, so Chihiro must gain employment at the bathhouse to prove her worth, in the process “selling” her name to Yubaba and becoming “Sen”, the Japanese number for 1000 (is she the thousandth person to have been trapped in the land?).

Like most Miyazaki movies, ‘Spirited Away’ is a rite of passage movie, with children forced to mature and accept responsibility in an alien adult world.  Continuing Miyazaki’s interest in the simple details of working, Chihiro learns the ropes, preparing the laundry at the bathhouse and scrubbing the grimiest bathtubs; discovering her worth through her labours.

So assured is Miyazaki’s fantasyland, this mundanity rests neatly alongside the fanciful flights of imagination that illuminate the screen, including the eco-friendly sequence when Chihiro removes bicycles and detritus from a sickened, putrescent river god, Okutaresama, restoring him to his original resplendent self.

Miyazaki also has the confidence to climax quietly with Chihiro taking a magical train journey to right a wrong Haku made when under the control of Yubaba, aided by the timid “No-face”, whom she rescues from the murkier side of his character brought out in the fevered atmosphere of the bathhouse (and which had some critics spying disguised messages of prostitution).  Haku’s true self (similarly robbed when he entered the service of Yubaba) is a surprise, although Miyazaki slyly slips in a clue midway through the film.

Criticisms of ‘Spirited Away’ claim the two-hour running time drags and the story is too opaque for younger viewers.  Yet, into these two hours Miyazaki crams a treasure trove of incident and detail, while the story simply requires attention, although Miyazaki films are admittedly more rewarding on subsequent viewings.

The animation is uniformly superlative, from the character designs, particularly the gallery of gods and grotesques who populate the bathhouse, to the background details, notably the carpets and curtains, which are easy to miss but add immeasurably to the experience.  The movie was hand-drawn and digitally enhanced to give it a glorious super-realistic look; check out the sequence when Haku and Chihiro run through a flower garden to marvel at the fruit of this process.

Humour, heart and high-level animation all combine to make ‘Spirited Away’ an overwhelmingly rewarding and endlessly magical experience.