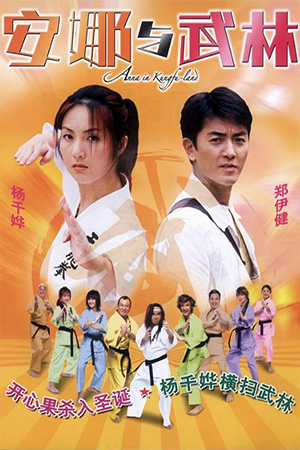 Alongside ‘Sound Of Colors’, ‘Anna In Kung Fu Land’ was Miriam Yeung’s two-pronged attack on the 2003 Christmas box-office in Hong Kong. While ‘Sound Of Colors’ was more a romantic drama though, this film was akin to the zany comedies (with romantic overtones) that have made her the star she is today. Nonetheless, the question remains as to which of her two Christmas hits was the more enjoyable – the answer will of course follow.

In his bid to promote high energy drink ‘Power Source’, advertising executive Kin (Cheng) devises an crafty gimmick that expects to reach an all new audience. His plan is to organise a martial arts tournament that will not only highlight the skills of the world’s finest fighters, but will also serve as an excellent endorsement for the product. After using his persuasive spiel with a Shaolin fighter, Kin travels to Japan to invite a dishonoured fighter (a fine cameo by Kurata) who has a score to settle with Shaolin. However, the master – a former pupil of Shaolin – decides to send his daughter Anna (Yeung) instead, a decision that is confirmed when, due to Kin’s flirtatious behaviour, she falls in love with him. When the sly advertiser travels back home, he finds himself followed by the adoring Anna and is forced to utilise every trick in the book to keep her and his fiancée apart. Meanwhile, the competition gets underway and a favourite emerges from the crowd: an American kickboxer who is determined to prove that Chinese kung fu is antiquated.

Opening with a glorious animation, ‘Anna In Kung Fu Land’ starts with the kind of energy and verve that makes the viewer sit up and take notice. Sadly, the chances of this being anywhere near Yeung’s best quickly dissipates as Raymond Yip’s typically unreliable direction takes over. From such an exciting beginning, the film descends into indecision, unsure as to whether it wants to concentrate on its pseudo-‘Shaolin Soccer’ style or the romantic/comic antics that ones expects from Yeung. Raymond Yip, though, handles neither of the two themes particularly well and so a potentially enjoyable hybrid comedy is turned into a moderately entertaining one. Yip’s failing here was also apparent in ‘For Bad Boys Only’ and the tepid ‘Sixty Million Dollar Man’ – a lack of cohesion and, more significantly, direction. He once again reverts to crude humour when matters become lacklustre, despite some moments of promise from behind the camera.

There are moments within ‘Anna In Kung Fu Land’ that do shine, despite the obvious failings of the production as a whole. Miriam Yeung is charming enough to turn weaker material into a winning performance, while the remainder of the cast is filled with excellent supporting acts by some of Hong Kong’s unsung heroes. Of significant interest is the presence of kung fu legends Lo Meng, Liu Chia Yung and Shoji Kurata; their professionalism, along with Lo Meng’s consistently surprising comic timing, add a much needed touch of class to Raymond Yip’s uneven blend. Admittedly, despite my criticisms, there are successful moments of mirth in ‘Anna In Kung Fu Land’ – this is clearly helped by a cast who really look like they’re relishing the experience. Therefore the film is not a unmitigated waste of time – it just doesn’t amount to more than the sum of its parts.

‘Anna In Kung Fu Land’ will no doubt disappoint viewers enticed by the intriguing title; there are a few brief moments of action, but they hardly amount to anything significant. However, it’s doubtful whether even non-action audiences will be fully satisfied by this entertaining, but insubstantial production. Miriam Yeung fans (of which I count myself a minor one) will naturally enjoy ‘Anna In Kung Fu Land’ more than most, though it’s certainly not a stand-out feature.