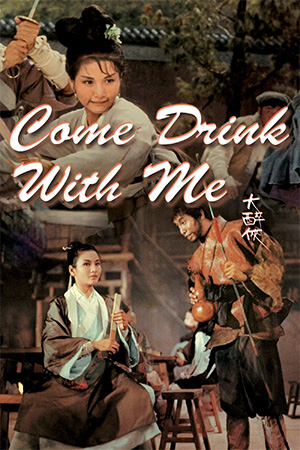 After a long and, at times, painful wait, Celestial Pictures have finally released the first batch of the Shaw Brother’s back catalogue. Among this mouth-watering selection is the landmark swordplay epic ‘Come Drink With Me’ which not only garnered worldwide plaudits for director King Hu on its initial release, but also remains well loved by genre buffs to this day. Having heard so much about the film, I sat down to watch it with eager anticipation and some curiosity as to how it would hold up today.

During a routine trek through the country, a small garrison of troops are ambushed by a notorious bandit clan who, after decimating the foot soldiers, capture the general and transport him back to their stronghold. The gang now demand the release of their imprisoned leader in return for the general’s life, a deal that has the authorities facing a number of quandaries. Into the bargaining steps famed swordswoman Golden Swallow (Pei Pei) who, disguised as a male warrior, meets the clan representatives to force them to release their prisoner. A furious battle occurs leaving the enemy in no doubt as to the abilities of Golden Swallow. Nonetheless, the clan refuse to free the captive and instead send their very best fighters to deal with the increasing threat from Golden Swallow. Thankfully, the young swordswoman is aided by a nonchalant wanderer named ‘Drunken Cat’ who warns her of the attack, but takes little interest in her genuine gratitude. However, she once again needs the help of Drunken Cat and, after he saves her from near death and nurses back to health, joins forces with this new ally. Drunken Cat’s past, though, begins to catch up with him when an old rival is revealed to be the figurehead of the bandit clan. With both sides now ready to conclude the matter and the forces amassed, the chance is given to Golden Swallow and Drunken Cat to gain revenge against their own personal opponents and free their target.

As I sat down to watch this I must admit to wondering whether it would deserve its reputation and if King Hu was indeed as capable director as is widely believed. Any misgivings were quickly erased after a mere few minutes of this exceptional swordplay masterpiece and then replaced by a hypnotised gaze at the screen. King Hu’s real maturity and perhaps genius is his combination of elements which many lesser directors struggle to marry; the storyline, characterisation and atmosphere are all woven together in a sublime concoction that will stand as a perfect legacy for Hu. Many of the film’s strengths have been seen endless times since its release in the 1960s and there’s always a danger that these can seem tired in retrospect. However, ‘Come Drink With Me’ is thankfully imbued with the energy and excitement that marks the great directors of the genre i.e. Chang Cheh, Liu Chia Liang, Sun Chong, Chor Yuen and Sammo Hung. The central partnership is a superb foundation for the film’s success and gives the martial arts pantheon two beloved characters: the enchanting Golden Swallow (played supremely by the wonderful Cheng Pei Pei) and the charismatic Drunken Cat. The swordplay/kung fu genre has seen many drunken wanderers in its time, but Drunken Cat stands out as one of the most endearing heroes in its history.

If there is a weakness here it is probably the development of the stories main villain. After a formidable build-up is given to the diabolical monk, his actual skills prove to be little match for Drunken Cat. This takes some of the resonance from the otherwise excellent finale and underpins the fact that, while this is a great film, it isn’t perfect. The action is another thing that might disappoint keen fight fans, but it still holds up remarkably well considering its age. There’s also so much quality in this production that the, at times, archaic action isn’t a significant flaw. ‘Come Drink With Me’ has convinced me of King Hu’s mastery of film-making and I would certainly consider his work here to be almost equal to the best of Chang Cheh and Liu Chia-Liang. Celestial haven’t disappointed with its first batch and have presented fans with a first-rate classic here. 4 stars, but so nearly 5.