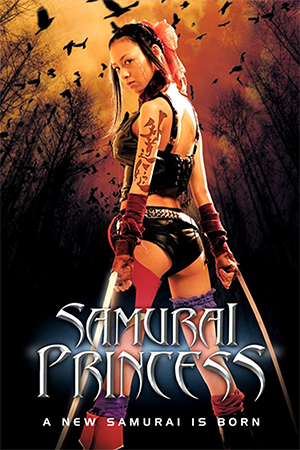 So the Japanese ultra gory, Looney Toon, Manga in motion, blood soaked genre trundles along with yet another limb severing entry, ‘Samurai Princess’. But for a genre that has only hit the mainstream in recent years, it already feels like the bottom of the barrel is being scraped. After the surreal and dizzyingly fun heights of ‘Machine Girl’ and ‘Tokyo Gore Police’, surely the genre hasn’t peaked already? Well unfortunately with ‘Samurai Princess’ this might be the case as it would seem that mad cap, blood gushing, ultra violent gore is only funny and entertaining for so long.

‘Samurai Princess’ comes from some good pedigree as well, as writer/director Kengo Kaji wrote ‘Tokyo Gore Police’ and special effects man Yoshihiro Nishimura provided all the gore effects for said film as he does here. But, and yes this has nowhere near the budget of other films in the genre, ‘Samurai Princess’ does feel like a case of just trying too hard to shock. And it isn’t so funny either. Despite having an unappealing shot-on-video look, the film does achieve a certain loopy, blood drenched vibe in a barmy tale of Samurai androids made from body parts of dead people. All shot in one forest and some abandoned warehouses, ‘Samurai Princess’ certainly doesn’t try to be anything else other than a gory, bad taste action film but for some reason the fun just isn’t there. The over-the-top blood, gore and body severing is thrust at the viewer from the get go and while some of it is inventive it has none of the gleefully gory sense of fun of ‘Machine Girl’ or the darkly surreal tone of ‘Tokyo Gore Police’. The actors are certainly game but, again, it all seems a little forced and the oodles of gore are starting to wear a little thin.

Still, if you are into this genre in a big way and haven’t had enough yet then there is plenty of madcap mayhem to enjoy if you are in need of a Japanese gore quick fix. Such “delights” include: a guy’s brain being ripped from inside his head to be read; detachable breasts that form some kind of killing device; characters with chainsaws and garden shears for legs; something called the Human Flesh Factory; a giant mutated penis (and to think its not actually that shocking or uncommon to see that in a film nowadays!); a woman vomiting up maggots (yep, scraping the bottom of the barrel!) and countless other bad taste scenarios.

But, as stated, none of it served up with any of the originality or kooky craziness of better gore films (‘Vampire Girl vs Frankenstein Girl’, ‘RoboGeisha’) and there is a distinctly misogynistic tone throughout which gives the film a rather unpleasant grimy feel. There are just enough wacky fights scenes to make the eighty minute run time reasonably bearable and the filmmakers use old school Anime sound effects in these scenes to add a certain silly charm but it’s just unfortunate the rest of the film wasn’t as fun. Only recommended for hardcore gore fans, those who have to see every film from this unique genre and if you are sitting around with a bunch of less critical film fans getting very drunk.