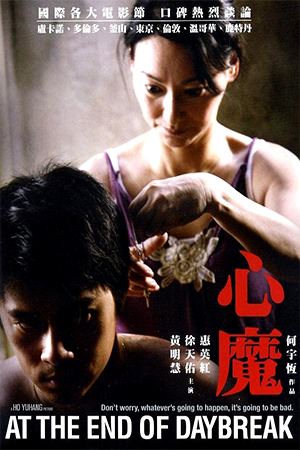 Hui Ying Hung (or Kara Hui if you prefer) had the slight misfortune of gaining recognition just as the Shaw Brothers’ studio was on its last legs film-making wise. While a new generation of actresses like Anita Mui, Do Do Cheng, Maggie Cheung were appearing in a variety of roles and genres, Hui slipped into the background and toiled away in fighting femme flicks that, while hugely entertaining for the most part, were hardly going to stretch her abilities. At long last she has seen her star rising once again with her award-winning role in Ho Yu-Hang’s sparse drama ‘At The End Of Daybreak’ and it’s rather pleasant to see what a difference it has made to her career subsequently.

Listless 23 year-old Tuck lives with his single mother in an ethnically Chinese suburb of Malaysia, toiling away in a supermarket and dating local schoolgirl Ying. His relationship with both women is terse and monosyllabic though each one cares for him in different ways: his mother, raising him on her own, tries to keep him on the straight and narrow while dealing with her own problems with alcohol; Ying looks to him as an escape from her domineering parents. When said parents discover the relationship, Tuck finds himself with a potential charge of statutory rape to deal with unless he pays off the victim’s family.

Thoroughly deserving her plaudits, Hui Ying Hung excels as Tuck’s troubled mother, bringing a certain empathy with her that isn’t necessarily in the character itself. As with many fine performances it is the expressions during moments of silence that say the most and Hui gives her part a poignancy throughout unspoken moments. Ultimately, it is the acting, especially by Hui, that makes ‘At The End Of Daybreak’ involving as it is clearly written and directed to keep the viewer as emotionally distanced as possible.

The old quandary of arthouse cinema is apparent from the first few frames of this drama: how can a film be marginally abstract and intentionally ice cold without viewers losing interest in the events shown. ‘At The End Of Daybreak’ has that same problem as it is clinically successful in its aims, but has no intention of taking us along with it. It’s therefore easier to admire the craft than to feel any warmth to the product and certainly the indolent character of Tuck and his equally feckless girlfriend Ying frustrate throughout. Social realist cinema can be the most edifying and informative genre the medium can offer, but Ho Yu-Hang’s style is such that the only sensation to get from the screen is mild hyperthermia.